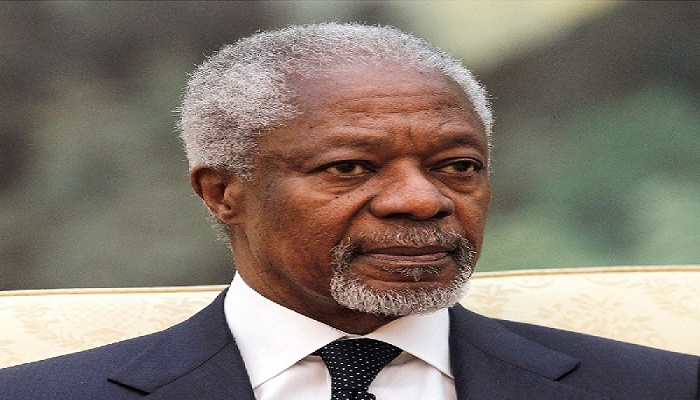 Kofi Annan, a former United Nations Secretary-General, has died at age 80, it has been confirmed.

He is said to have died Saturday morning in Switzerland, where he was receiving medical care.

He died peacefully in his sleep surrounded by his wife Nane Maria and children.

He recently visited South Africa and returned to Switzerland for medical care.

In a tweet, the UN Migration body said: “Today we mourn the loss of a great man, a leader, and a visionary.”

It went on: “A life well lived. A life worth celebrating.”

Ghana’s national flag is to fly at half-mast across the country and in all of Ghana’s diplomatic missions across the world, from Monday, August 20, 2018, for one week in honour of Kofi Annan, President Nana Addo Dankwa Akufo-Addo has directed.

Announcing the death, the Annan family and Kofi Annan Foundation posted on Facebook: “It is with immense sadness that the Annan family and the Kofi Annan Foundation announce that Kofi Annan, former Secretary General of the United Nations and Nobel Peace Laureate, passed away peacefully on Saturday 18th August after a short illness. His wife Nane and their children Ama, Kojo and Nina were by his side during his last days.”

“Kofi Annan was a global statesman and a deeply committed internationalist who fought throughout his life for a fairer and more peaceful world. During his distinguished career and leadership of the United Nations he was an ardent champion of peace, sustainable development, human rights and the rule of law,” the post added.

It continued: “Wherever there was suffering or need, he reached out and touched many people with his deep compassion and empathy. He selflessly placed others first, radiating genuine kindness, warmth and brilliance in all he did. He will be greatly missed by so many around the world, as well as his staff at the Foundation and his many former colleagues in the United Nations system. He will remain in our hearts forever.”

The Annan family requested for “privacy at this time of mourning. Arrangements to celebrate his remarkable life will be announced later,” the message said.

The Nobel Peace Prize winner was born in Kumasi, Ghana in 1938 and served as the 7th UN Secretary-General, from 1997 to 2006, and was the first to rise from within the ranks of the United Nations staff.

He had been a member of The Elders, a group of global leaders working for human rights since it was founded in 2007. In 2013, he became its chairman.

Mr Annan was awarded the Nobel Peace Prize jointly with the United Nations in 2001 “for their work for a better organised and more peaceful world.”

In 2002, the Asantehene, Otumfuo Osei Tutu II, gave him the highest honour in Asanteman, and conferred the rare title of “Busumuru” on Kofi Annan in recognition of his service to humanity.

“I and the entire Ashanti state have decided to add your name to the Busumuru title, because of your selflessness and contributions to humanity, and promotion of peace throughout the world,” Otumfuo Osei Tutu II declared when he placed a symbolic gold necklace around Annan’s neck to the sound of traditional drumming.

“Busumuru” is the name of the golden sword used by the Asantehene to swear allegiance to the Ashanti kingdom at his coronation.

President Nana Addo Dankwa Akufo-Addo in a tribute wrote: “The Government and people of Ghana, First Lady Rebecca and I are deeply saddened by the news of the death, in Berne, Switzerland, of one of our greatest compatriots, Mr. Kofi Annan.

“I extend, on behalf of the entire Ghanaian nation, our sincere, heartfelt condolences to his beloved widow, Nane Maria, and to his devoted children, Ama, Kojo and Nina, on this great loss. I am, however, comforted by the information, after speaking to Nane Maria, that he died peacefully in his sleep,” President Akufo-Addo added.

“Consummate international diplomat and highly respected former Secretary General of the United Nations, Mr. Kofi Annan was the first from sub-Saharan Africa to occupy this exalted position. He brought considerable renown to our country by this position and through his conduct and comportment in the global arena. He was an ardent believer in the capacity of the Ghanaian to chart his or her own course onto the path of progress and prosperity. Undoubtedly, he excelled in the various undertakings of his life, leaving in his trail most pleasant memories. His was a life well-lived.”

“I have directed that, in his honour, Ghana’s national flag will fly at half-mast across the country and in all of Ghana’s diplomatic missions across the world, from Monday, 20th August, 2018, for one week.

Rest in perfect peace, Kofi. You have earned it. God bless.”

After receiving his early education (at Mfantsipim School, Cape Coast), Annan attended the College of Science and Technology in Kumasi.

At the age of 20, he won a Ford Foundation scholarship for undergraduate studies at Macalester College in St. Paul, Minnesota, where he studied economics.

Even then he was showing signs of becoming a diplomat, or someone skilled in international relations. Annan received his bachelor’s degree in economics in 1961.

Shortly after completing his studies at Macalester College, Annan headed for Geneva, Switzerland, where he attended graduate classes in economics at the Institut Universitaire des Hautes Etudes Internationales.

Following his graduate studies in Geneva, Annan joined the staff of the World Health Organization (WHO), a branch of the United Nations.

He served as an administrative officer and as budget officer in Geneva.

Annan always assumed that he would return to his native land after college, although he was disturbed by the unrest and numerous changes of government that occurred there during the 1970s.

Annan became the Alfred P. Sloan fellow at the Massachusetts Institute of Technology. At the end of his fellowship in 1972, he was awarded a master of science degree in management. Rather than return to Ghana upon graduation, he accepted a position at the UN headquarters in New York City.

Work with the UN

In 1974 he moved to Cairo, Egypt, as chief civilian personnel officer in the UN Emergency Force. Annan briefly changed careers in 1974 when he left the United Nations to serve as managing director of the Ghana Tourist Development Company.

Annan returned to international diplomacy and the United Nations in 1976.

For the next seven years, he was associated with the Office of the United Nations High Commissioner for Refugees in Geneva. He returned to the UN headquarters in New York City in 1983 as director of the budget in the financial services office.

In fulfilling his duties to the United Nations, Annan has spent most of his adult life in the United States, specifically at the UN headquarters in New York City.

Annan had by this time filled a number of roles at the United Nations, ranging from peacekeeping to managerial, and the 1990s were no different. In 1990 he negotiated the release of hostages in Iraq following the invasion of Kuwait. Five years later, he oversaw the transition of the United Nations Protection Force (UNPROFOR) to the multinational Implementation Force (IFOR), a UN peacekeeping organization. In this transfer of responsibility, operations in the former Yugoslavia were turned over to the North Atlantic Treaty Organization (NATO).

In recognition of his abilities, Annan was appointed secretary-general, the top post of the UN, by the UN General Assembly in December 1996.

He began serving his four-year term of office on January 1, 1997. Joining him was his second wife, former lawyer Nane Lagergren of Sweden.

She is the niece of the diplomat Raoul Wallenberg (1912–c.1947), who saved thousands of European Jews from the German Nazis during World War II (1939–45), when American-led forces fought against Germany, Italy, and Japan. Annan and Lagergren were married in 1985.

The couple has one child.

Annan’s code of soft-spoken diplomacy was given a boost by the outcome of his talks with Saddam Hussein in 1998. UN observers wait to see how additional crises will be handled by the gentle but determined man from Ghana.

In the summer of 2001, the United Nations unanimously appointed Kofi Annan to his second five-year term as secretary-general. On October 12, 2001, the Nobel Peace Prize was awarded jointly to the United Nations and Kofi Annan. The Nobel citation pointed out that Annan had brought new life to the peacekeeping organization, highlighted the United Nations’s fight for civil rights, and boldly taken on the new challenges of terrorism and acquired immune deficiency syndrome (AIDS; a disease of the immune system).