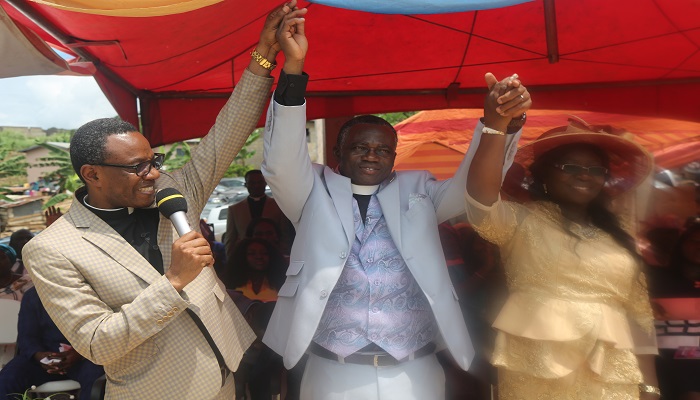 It was a glorious day for the Ayitey Family as thousands of believers from all walks of life converged at the James McKeown Revival Centre at Asamankese in the Eastern on Sunday, August 19, 2018 to celebrate the climax of the 39-year successful ministry of Apostle Moses Ayitey.

As part of the ceremony, several citations touting the outstanding ministry of Apostle Ayitey and his wife, Esther were presented to them by various groups.

The Obuasi Area Head, Apostle Martin Seth Appiah, in a sermon on the topic: “The Lord Protects and Delivers those who Fear Him” (Psalm 34: 7-9; 25:12-14), revealed that the fear of God is the pivot around which all sound doctrines evolve. This is because it is the fear of God that enables the believer to obey God and follows His precepts, demonstrate love to others and live a righteous life, as outlined in Galatians 5:22-23.

He explained that although righteous people may face many difficult situations in life, God always delivers them.

Apostle M. S. Appiah touched on four key areas where Christians are required to exhibit the fear of God in order to make it to heaven. These are: the full-time pastoral ministry, church responsibilities, marriage and dealing with fellow believers.

For him, the fact that one is a minister of God does not mean that he is qualified for heaven. “Many apostles, bishops, prophets and pastors of the universal church would miss heaven if they don’t amend their ways,” he cautioned.

He also posited that many church leaders and officers do not fear God as they indulge themselves in distasteful acts like stealing of church money and sexual immorality. “They don’t fear God, and any person who doesn’t fear God should forget about heaven,” he said, while referring to Galatians 5:19-21.

He called on believers to stop the evil acts they perpetrate against their fellow Christians, saying, “We are killing one another through backbiting and gossips; God would judge all of us because He sees the secrets things embedded in our hearts and minds.”

Concluding his sermon, Apostle M. S. Appiah identified seven benefits that are accrued by believers who fear the Lord as stipulated by King David: God’s angel encamps around them, they lack nothing, God shows them the path they should choose, they will spend their days in prosperity, their descendants will inherit the land, God confides in them and He makes His covenant known to them.

Born on January 6, 1953 at Apesika near Adawso-Akwapim in the Eastern Region, Moses Kwadjo Ayitey, the second among eight siblings, had his basic education at Atebui L/A Primary School and completed at Adawso Presbyterian Middle School in 1973.

Though he passed the Common Entrance examination to secondary school, he could not go due to financial challenges. On the recommendation of his former head teacher, he entered into apprenticeship training at Nkawkaw in 1975 and passed out successfully as an Auto Sprayer in 1978.

After completing his apprenticeship, his master immediately employed him to work with him due to his hardworking nature. He worked with him for one year before he was called into the full-time ministry of The Church of Pentecost in 1979.

He is married to Esther Darkwaah Ansah Ayitey and are blessed with six children.