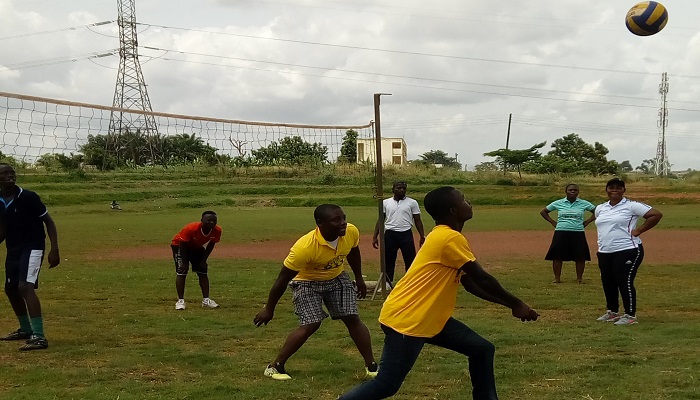 The Pentecost International Worship Centre in Kwadaso Area (PIWC-Kwadaso) of The Church of Pentecost organized fun games for its members on Friday, May 25, 2018, at the Autonomy Hall football field of the University of Education, Winneba.

The funfair, which included a health screening exercise, aerobics, as well as indoor and outdoor games, was the first of its kind to be organised by the Church since its inauguration in June 2017.

The ecstatic and colourful atmosphere that characterized the event was boosted by the huge crowd of members who thronged the event venue adorned in branded T-shirts and other paraphernalia.

The programme started with a health screening exercise spearheaded by the PIWC-Kwadaso Medical Team in collaboration with other medical practitioners from the Komfo Anokye Teaching Hospital. The patrons were screened for Hepatitis B, Blood Pressure and Blood Type after they had been given a brief health talk about the causes, prevention and dangers of Hepatitis B by the health officials.

Mr Philip Boateng, a Lecturer at the University of Education, Winneba, and a member of Group 3, came out on top in the Male Category of the Playing Cards competition.

Group 3 were once again adjudged winners of the Volleyball Competition after they defeated Groups 4 and 1.

The soccer competition, which was the final game for the day, was keenly contested by all contestants; however, Group 4 was able to edge past Group 1 in a dramatic penalty shoot-out to clinch the top prize.

Another highlight of the event was when the Women’s Ministry led by Mrs Mavis Oppong (Wife of the Resident Minister) engaged in a game of Ampe. The women were seen jumping and clapping energetically to the amazement of all the other members present.

In his closing remarks, the Presiding Elder of PIWC-Kwadaso, Elder Emmanuel Amfo Sackey, congratulated all participants for their active involvement in all the activities. He also gave special commendation to Group 3 for emerging as the overall winners of the day.

Elder Amfo Sackey admonished the participants to take good care of their health, emphasizing that: “A Christian must be fit and strong both spiritually and physically.”

Elder Douglas Brain of Group 3, who was the goalkeeper for the group’s soccer team, received the trophy on behalf of the winning Group.