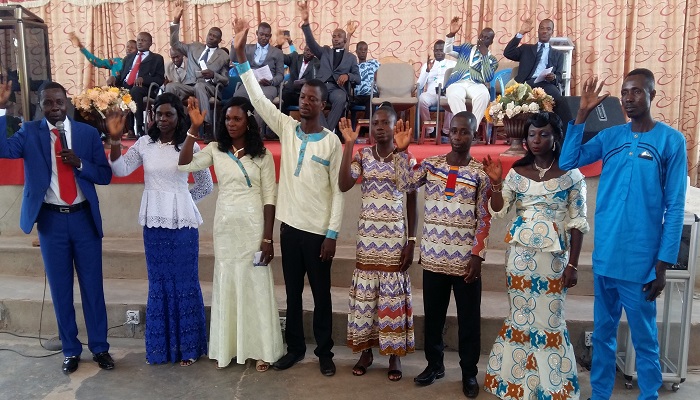 The Berekum Brenyekwa District in the Berekum Area of The Church of Pentecost has organized a mass wedding on May 26, 2018, for four couples at the Brenyekwa Central auditorium.

Prior to the event, the couples; Elder Justice Okrampah Aboyin and Deaconess Florence Gyamea, Osei Kwame and Paulina Yeboaa, Nana Kwame Takyi and Grace Taabea, and Thomas Oppong Adjei and Gladys Effah, who are all members of the District, had been married for the past 19, 17, 13 and 11 years respectively.

The marriage ceremony was officiated by the District Minister, Pastor Frank Rockson.

She lamented over the fact that many marriages start well, however, the value of their love with which they start the marriage begins to reduce mostly after 5 years.

According to her, this is usually as a result of unforgiveness, nagging or harsh languages and denial of sex, among others.

Quoting from 1Corinthians 13:4-8, she said love in marriage should rather be growing as the years go by, and this can be made possible by demonstrating kindness, cheerfulness, humility and corporate prayers.

She mentioned oneness, good listening skills, listening to the voice of God, forgiveness, love and submission as the pillars of every successful marriage.

There was a great joy as the couples lined up to express their appreciation to God for the successful event and for being the first couples to participate in the first-ever mass wedding service in the history of the District.