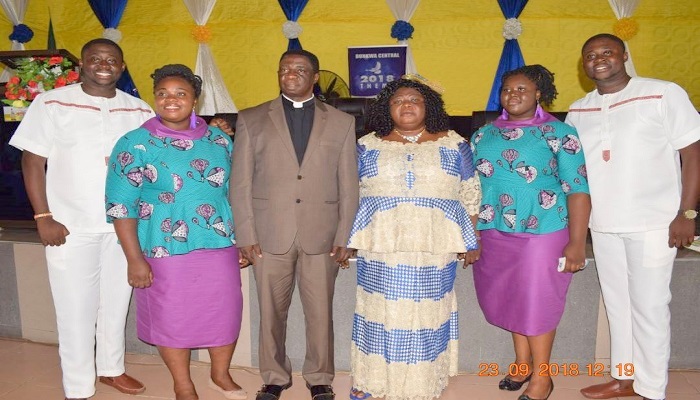 Members of The Church of Pentecost in Dunkwa Area gave their new Area Head, Pastor Jones Awuah Afrifa and family, a rousing welcome on Sunday, September 23, 2018, during a special service held at the Dunkwa Central Church auditorium to officially welcome them to the Area.

Pastor Jones Awuah Afrifa was transferred from Achimota District in the Achimota Area to replace Apostle John Osei Amaniampong, who has been transferred to the La Area in Accra.

Speaking on the topic, “The Virtues Which Will Help Us Remain In Christ,” the Sefwi Bibiani District Minister, Pastor George Nsiah Afriyie, charged the new Area Head and family, and members in the Area to exhibit godly virtues in order to fulfil the purpose of God in the Area.

Basing his sermon on Proverbs 9:10, Pastor Nsiah stated that the word of God is prophetic, and that Christians must apply the virtues of God in their lives.

Pastor Afriyie charged Christians to respect authorities in the Church. According to him, respect for author is not just one of the core values of the Church, but a godly virtue that must be exhibited in the life of the Christian.

He encouraged the congregation to be loyal to God and be patriotic to the Church. He noted that people who are loyal to God please Him in all things and give themselves wholeheartedly to Him.

Pastor Afriyie encouraged ministers in the Area to be spiritual companions of God, suitable companions to their Area Head, and be social companion to their members.

In a remark, Apostle Vincent Anane Denteh advised members in the Area to be loyal, truthful and faithful to God and church. He advised the congregation to speak well of the Church and encourage their ministers since pastors also need encouragement.

Pastor Jones Awuah Afrifa, in response, commended his predecessors for the great work they have done in the Area. Quoting from Nehemiah 2: 18, he encouraged all members in the Area to rise and build the kingdom of God.

“Let’s arise and build. We can build the kingdom of God with teamwork, prayer and effective evangelism,” he said.

The service brought together some dignitaries, notably among them was Apostle Samuel Badu Nyarko (Retd).