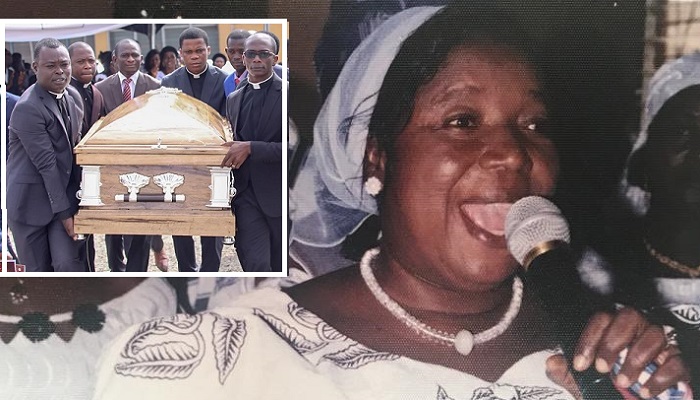 The General Council of The Church of Pentecost paid a glowing tribute to the late Mrs. Sophia Archer during a memorial service held in her honour on Saturday, September 22, 2018, at the DVLA Park, Weija.

The tribute, which was read on behalf of the Council by the General Secretary, Apostle Alexander Nana Yaw Kumi-Larbi, described her as “a great pillar of support to the successful ministry of her husband, Apostle Joseph Benjamin Archer (now of blessed memory), one of the leading figures of The Church of Pentecost who stood against all odds to lay a solid foundation for the rich Pentecostal heritage.

“Though a disciplinarian, Mama Sophia had a kind heart and showed love to all persons who were in need. She loved to share the little she had, making the Mission House very accommodative to both church members and non-members.”

The Chairman of The Church of Pentecost, Apostle Eric Nyamekye, who officiated the event, in his remarks, thanked God for blessing the late Mrs. Sophia Archer with many years on earth and also giving her as a gift to the Church and humanity.
“Mrs. Archer served in the full-time ministry of the Church for 32 years with her husband. This means that she practically spent the productive years of her life serving God and the Church,” he said.

The bereaved family and the SSNIT Flats Assembly in Dansoman Area, where she was worshipping before her passing, took turns to share their fond memories of Mama Archer.

Preaching the sermon titled: “The Death of the Righteous is Precious in the Sight of the Lord” based on Psalm 75:24-25 at the event, the Bompata Area Head, Apostle Abraham Lincoln Angoh emphasized that God places premium on the death of a righteous person.

He, however, cautioned that although all Christians may appear to be righteous, it is only God, the Righteous Judge, who is able to distinguish between believers who are indeed upright.

Apostle Angoh said that every human being should bear in mind that a time would come when they would leave this earth. As a result, they should do everything possible to ensure that they make it to heaven.

“Jesus Christ died on the cross and rose up again on the third day. As Christians, this is the assurance we have in the Lord that when we die in Him, we will also be resurrected after death. This is why we must live our lives to the glory of God,” he advised.

The Bompata Area Head said that the death of the righteous people is precious to God because He has made provision for a place of glory, eternal rest and perpetual peace for them.

He, therefore, charged believers to remain in Christ and to be content with what the Lord has given them. “We must not allow the world to lure us from the benefits that have been reserved for us. Rather, more than anything else, we should desire to die like the righteous,” he said.

Mrs. Sophia Archer, affectionately called Sofomaame Archer, was a descendant of the Nana Nda Abeteko Alonwoba (KORNA) family of Lower Axim Traditional Area. She was born on February 29, 1948, to Nana Yameke Amuzualh and Maame Ama Edeafor (both of blessed memory)

In 1965, she got married to Apostle Joseph Benjamin Archer, with whom she served 32 years in the full-time ministry of The Church of Pentecost. Together, they served at Abidjan (Cote D’Ivoire), Agona Nyakrom, Agona Swedru, Koforidua, Sefwi Asawinso, Duayaw Nkwanta, Sunyani, Nkawkaw, Cape Coast and Accra, where they retired from active ministry in 1997.