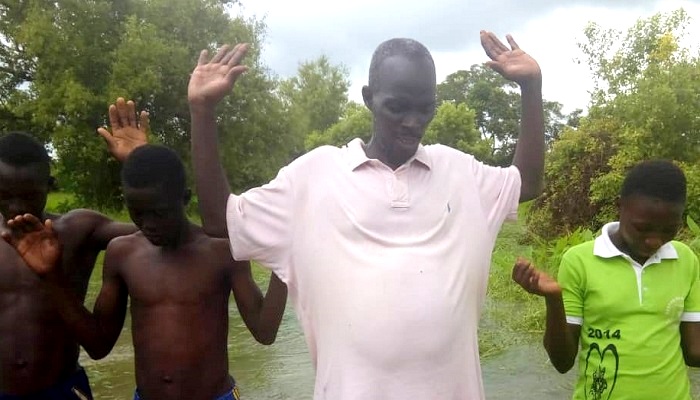 Mr. John Ntebe, an idol worshipper, has given his life to Christ after several failed attempts to eliminate the Kpalbutabu District Minister of The Church of Pentecost, Pastor McCarthy Amevade Coffie, and his wife, Sandra.

According to him, when the minister and his wife arrived in the town, he gave them a 6-month ultimatum to pack their belongings and leave or lose their lives.

“I felt that their arrival in the town would undermine his authority and influence as the spiritual leader and opinion leader of the Kpalbutabu community,” he said.

John, therefore, took the couple to other fetishes in Kukpalgu, Zabzugu, Kintampo and other places, all in an attempt to humiliate them publicly and eliminate them, but without success.

Mr. Ntebe said that his persistence was further dealt a major blow when his wife gave her life to Christ and joined the Church. That notwithstanding, he still saw it as an opportunity to attack the pastor through his wife by using her to sow seeds of confusion in the Church and the Mission House without her knowledge.

“I went for juju (charm) to cause my wife to steal from the Mission House and to be disgraced so that she would stop attending the church.
I also went for a money ritual to make me one of the great spiritualists in the Kpalbutabu town and its environs to enable me conquer the territory,” he said.

Unfortunately for him, instead of taking the life of Pastor Coffie, John rather fell sick and resorted to herbal medicine for treatment.

After there was no improvement in his condition, John Ntebe finally gave up and rushed to the Mission House for assistance. He knelt down
before Pastor Coffie and began to confess all he had done.

Pastor Coffie, together with Elder Joshua Semador, who had visited the minister at the Mission House, prayed for Mr Ntebe and led him to receive Christ. John Ntebe brought his entire household to receive Christ and were baptized a week later.

To the glory of God, the Ntebes are now active members of the Church.