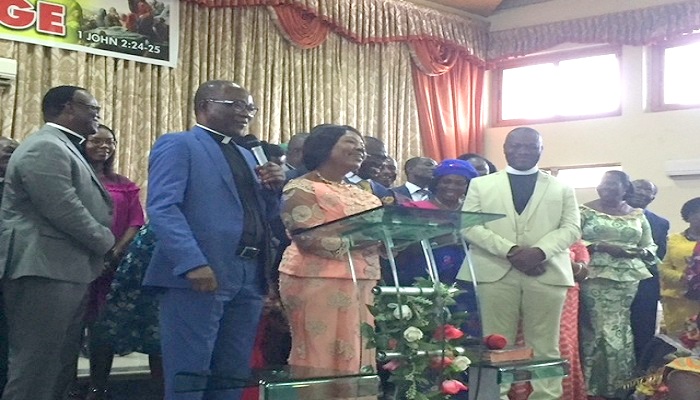 The Asokwa Area of The Church of Pentecost has held a welcome service for the new Area Head, Prophet James Osei Amaniampong and his family.

The ceremony which took place at the McKeown Temple in Asokwa was attended by several ministers of the Church in Kumasi and other parts of the country.

Prophet James Osei Amaniampong (an Executive Council Member of the Church) was transferred from Teshie-Nungua Area in Accra, where he served for five years.

In a sermon on the topic, “See Him as the Servant of Christ,” the Area Head for Bompata, Apostle Abraham Lincoln Angoh, urged Christian leaders not to behave as if they called themselves into ministry. “It is God who chooses who to serve,” he said.

He quoted various biblical texts including Acts 6:1-7; 1 Corinthians 4:1; 1 Kings 12:14, among others, and said the qualification to be a servant of God is to be full of the Holy Ghost and to have faith.

Apostle Angoh said: “A servant should not allow himself to cause division in the church as happened in the Corinthians church. It is He who calls and prepares people for ministry. It is the Almighty God who fills His servants and grants gifts and grace.”

He further urged Christian leaders to eschew nepotism, discrimination, favoritism, and disregard for others.

In response, Prophet James Osei Amaniampong expressed his appreciation to the leadership and members of the Teshie-Nungua Area for the love shown him during his 5-year stay in the Area.

According to him, he started his ministry in Asokwa where he identified and nurtured his gifts as a young man and was called to the office of an Elder. He said he also had his wedding ceremony in the same auditorium.

Prophet Amaniampong stated: “I am here to promote the things of God. I am here to serve and to finish off my ministry in four years’ time with the experience I have gone through in my 37 years of ministry, and to use the prophetic gifts and insights God has endowed me with to do things that will promote the work of God.”

He urged all to support his ministry to move Asokwa Area to another level. “If we all take a decision to do something, we must all help to do it. I am determined and passionate about pouring the pool of knowledge and experience God has blessed me with,” he added.