The Love Of God Is So Deep – Elder Dr. Amo Tobbin Declares 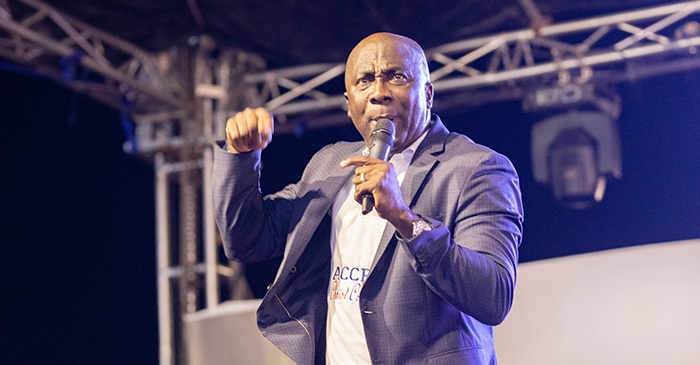 Elder Dr. Samuel Amo Tobbin of the Dr. Thomas Wyatt Assembly of The Church of Pentecost has asserted that the depth of the love of God for His children is unfathomable.

According to the Chief Executive Officer (CEO) of the Tobinco Group of Companies, God has an affinity for all those whom He considers His own.

Elder Tobbin said this yesterday during the evening session of the ongoing “Accra for Christ” crusade at the Nsakina M/A School Park.

Speaking on the theme for the crusade: “This Same Jesus” (Acts 1:11), Elder Dr. Tobbin said Jesus Christ demonstrated His love to humankind through the many miracles He performed while on earth. However, the ultimate love He showed was dying on the cross for their sin.

He further noted that this sacrifice was necessary because it paid for the sins of humanity, and also gives all who believe in Christ the right to become God’s children and earn the Father’s Love.

“God is love, but He also have a special kind of love, which I call the Father’s Love, which His children enjoy. And this love is greater than that which He has for the world,” he said.

Dr. Tobbin explained that God’s love prospers and transforms lives for the better, adding: “When you come to Jesus, He will not only save you, but also make you a blessing to others.”

He further noted that Jesus died a disgraceful death so that those who receive Him do not suffer this fate.

He stated that God demonstrates His love to believers by providing them special protection.

To buttress his assertion, the business mogul shared a testimony of how he was miraculously delivered when he had been taken captive by some assailants while returning from a business trip in Lagos, Nigeria.

He also testified of God’s deliverance for his family when they were attacked by armed robbers, stressing that “Jesus always comes to the rescue of those He loves.”

Referring to Acts 1:11, Elder Tobbin said that although Jesus has ascended to heaven, He still shows up whenever those He loves are in trouble or need His help.

He cited how Jesus intervened and rescued Peter from prison (Acts 12:1-19) and when He stopped Saul (Paul) on while he was on his way to persecute believers in Damascus (Acts 9:1-19).

The Tobinco Group CEO observed that after Christ resurrected from death, He only showed Himself to His disciples and spent more time with them. This, he said, further proves the strong bond Jesus has with those He loves.

Elder Dr. Amo Tobbin, therefore, called on all who are yet to accept Christ into their lives to do so and become part of God’s family in order to experience the Father’s love.