Why Cristiano Ronaldo’s Penalty For Portugal Vs. Ghana Didn’t Go To A Full VAR Review 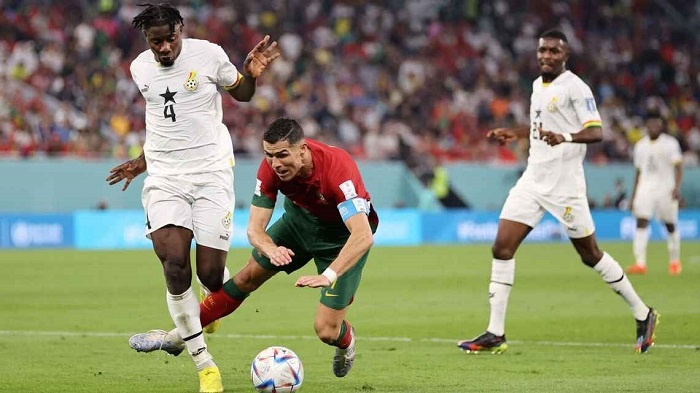 What happened: Portugal were awarded a penalty in the 62nd minute when Cristiano Ronaldo was knocked over by Mohammed Salisu.

VAR review: This only required a quick check by the VAR, United States referee Armando Villarreal.

Replays showed that Ronaldo definitely got to the ball first ahead of Salisu before there was contact on the Portugal striker’s boot and upper body.

Even though this could certainly be considered a soft penalty, we have to look at it in VAR terms; it would not be seen as a clear and obvious error by the match referee, fellow American official Ismail Elfath. Equally, if the referee hadn’t given the penalty, it’s unlikely the VAR would have advised a spot kick.

If Salisu had gotten to the ball first before Ronaldo, this would have been grounds for a full review, but unfortunately for the Ghana defender, he failed to do so.

Ronaldo also thought he had scored in the 31st minute, but the referee had already blown for a foul against him for a push on Alexander Djiku. The VAR is unable to review anything after the referee’s whistle, so he cannot look back at the foul to award the goal.

Ghana coach Otto Addo says the penalty scored by Cristiano Ronaldo during Ghana’s 3-2 loss to Portugal was a gift from the referee.

Ronaldo won and scored the penalty in the 65th to give Portugal the lead as he became the first man to score in five different editions of the FIFA World Cup.

However, Addo at the post-match conference at Stadium 974 after handling his first game at the World Cup said the American referee Ismail Elfath erred in awarding Portugal a penalty.

“I think it was a really wrong decision, we were playing the ball… I don’t know why VAR did not come up, there was no explanation for it,” said Addo.

“It was a wrong decision. It was actually a foul against us,” Addo stated.

He added: “If somebody scores a goal, congratulations. But this was a gift, really a gift.”

Addo disclosed that he tried to talk to the Major League Soccer referee about some of the decisions that went against Ghana after the game.

“I wanted to do it in a calm way but I was told he was in a meeting. He was not in our favour. We got a few yellow cards which were deserved but there was also holding of jerseys and stopping counterattacks that were also yellow cards but not given to them.”