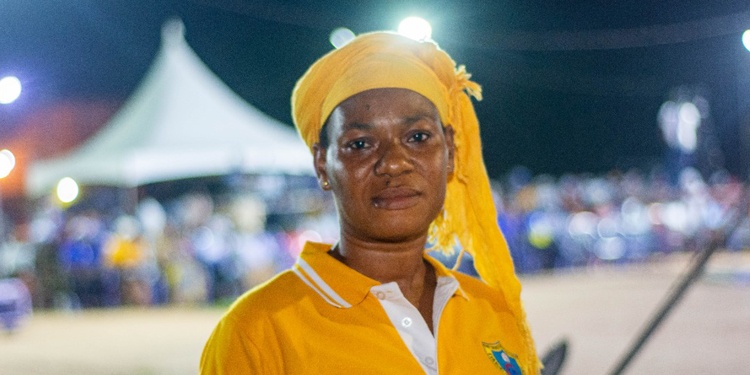 Six years ago, Mrs. Evelyn Nyame Nyarko survived a car accident. Although her life was spared, Evelyn sustained severe injuries to her left leg. The pains had persisted for all these years until last night when she was miraculously healed during the opening session of the “Accra for Christ” crusade.

Mrs. Nyarko, a member of the Manhean English Assembly of The Church of Pentecost, shared the good news with the thousands gathered at the Nsakina M/A School Park for the event opening.

The four-day outreach, being jointly organised by the Evangelism Ministry of The Church of Pentecost and the Anyaa-Ablekuma Area, is under the theme: “This Same Jesus” (Acts 1:11).

Speaking to PENTECOST NEWS on the sidelines of the crusade, Mrs. Nyarko said that she had gone to town to get some supplies for her catering business when an unknown person pushed her into the path of an oncoming vehicle.

“The bus knocked me down, and I was caught underneath the vehicle, but the driver was unaware of what had happened, until some bystanders began to shout at him to stop the car because someone was trapped underneath,” she said.

So, they quickly dragged her out and rushed her to the hospital.

According to her, despite the many visits to the hospital and application of various ointments for the last six years, she still felt pain anytime she wore heels or stood for some time.

Mrs. Nyarko said that when the Evangelism Ministry Director, Apostle Dr. Amos Jimmy Markin, called out for persons seeking the miraculous touch of God, she decided to step forward in faith because she needed divine intervention.

“I went forward because six years is a very long time, and I felt that since the doctors cannot help me, then only Jesus can completely heal me of my pain. And lo and behold, He has done it,” she exclaimed.

Mrs. Nyarko and many others who had received instant healing at the event were grateful to God for intervening in their predicaments.