42 Persons Receive Special Awards From The Church Of Pentecost 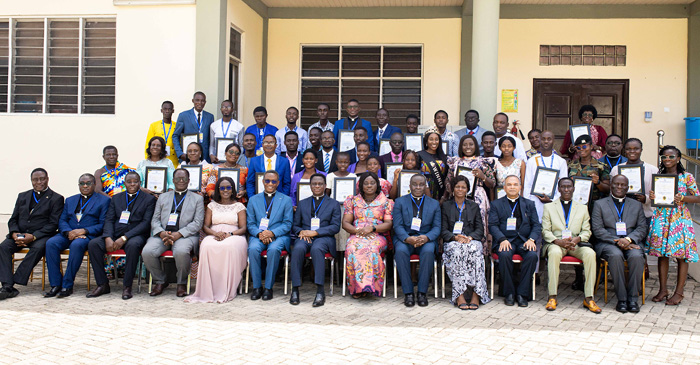 The Church of Pentecost has presented special awards to 42 members of the church who excelled in various spheres of life in society.

The awards were presented to the recipients on Wednesday, May 4, 2022, during the State-of-the-Church Address delivered by the Chairman of The Church of Pentecost, Apostle Eric Nyamekye, at the official opening of the 17th Extraordinary Council Meetings of the church held at the Pentecost Convention Centre (PCC), Gomoa-Fetteh, near Kasoa in the Central Region.

Apostle Nyamekye congratulated them for raising the flag of the church high as they keep exhibiting excellence and hard work in their various fields of endeavours.

According to the Chairman, the awardees received various recognitions last year in some Ghanaiain institutions and corporate organisations for distinguishing themselves in their fields of work.

Also receiving a special award from the church was Sarfoa (Benedicta Sarfoa Asamoah) of the Pentecost International Worship Centre (PIWC)-Atomic, Accra who represented the Ashanti Region and won Ghana’s Most Beautiful Contest organised by TV3.

Others were Miss Francisca Lamini formerly of Keta Senior High School who was adjudged the Best Female Contestant for the 2021 National Science and Maths Quiz and has been offered a scholarship to study at Harvard University; and Petra Terkper & Jennifer Zutah Kafui from Mfantsiman Girls SHS who were winners of the 65th National Independent Day Debate competition.

Also, Miss Pheobe Afeti from the Ho Area of the church, who was adjudged the Overall Winner of the 2021 Preacher Kid Contest organised by the Children’s Ministry of The Church of Pentecost, as well as Master Benjamin Kwadwo Acquah and Master Festus Eshun Yamoah of Odorkor Area, who also emerged winners of the 2021 Youth Ministry Quiz Competition for the junior category, were honoured.

Miss Pethuel Afua Sompa Yeboah of Alajo District of the church, who won the Israel-Ghana Relationship Art Competition for kids, Miss Nuworzah Agnes who won the WASSCE Overall Best Female Student in Oti Region, and Master Richmond Tenadu, a Class 3 pupil of PIWC Michel Camp, who was adjudged the winner of the Ghana Book Worm Season 4 Competition, were also honoured.

While Confidence Fiagadzi, a police officer from the Darkuman District of the church, who was adjudged the Ghana Integrity Personality of the year 2021 by the Ghana Integrity Initiative, and Anita Aya Afful of Kwashieman Official Town Assembly of the church who broke a 10-year army record by passing out of Ghana Military Academy winning three (3) out of four (4) awards available, namely Overall Best Army Recruit, Best Female Army Recruit and Best in Academics Army Recruit, were both recognised by the church.

Elder Dr. Samuel Nana Amo Tobbin of Accra Newtown District of the church, who was adjudged the CEO of the Year by the Ghana Pharma Awards, and Elder Dr. Nana K. Gyasi of Suame Area, who also received the 2021 National Best Customer Award from CIMAF Cement Co. Ltd, were also honoured by the church.

PrevPreviousEveryone Will Account For Their Works – Apostle Holachi Asserts 
NextOur Call Is To Follow Christ – Rev. Glass To ChristianNext