The Church Of Pentecost Chairman Celebrates Easter With Persons With Disabilities 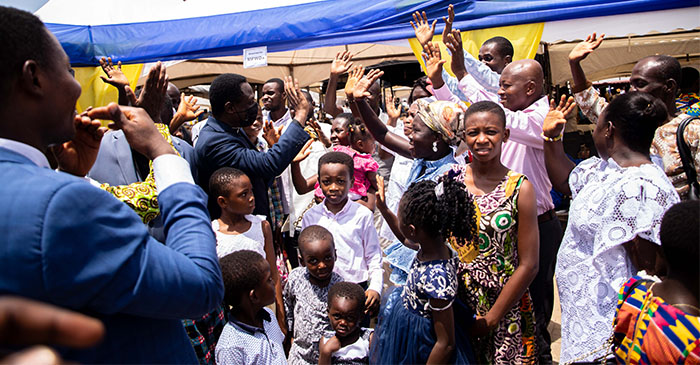 The Chairman of The Church of Pentecost, Apostle Eric Nyamekye, spent this year’s Easter season in Koforidua, the Eastern Regional capital, sharing fellowship with members of the Koforidua Deaf Assembly of the church.

Joining the just-ended Koforidua Area Easter convention which took place at the Jubilee Park, Gallaway, Apostle Nyamekye took time off his busy schedule to interact with the members of the Deaf Assembly who took part in the convention.

In an interview with PENTECOST NEWS, Elder David Asante Agyei, Presiding Elder of the Deaf Assembly, said that his members could not hide their utmost joy and gratitude to God for the opportunity to join and celebrate the Easter together.

“When you make them feel that they are the same as you, they will rally and accept whatever you do,” he stated.

He disclosed that the Koforidua District Minister of the church, Pastor Akwasi Amo Afropong, has put in much effort to make services conducive for them whenever they meet together.

He mentioned that the opportunity to lead the Deaf Assembly became expedient for him to learn from them. He, therefore, urged all Christians to endeavour to learn sign language to help in smooth communication with PWDs during church service.

Elder Agyei further called on members of the church to approach persons with disabilities with smiles, especially deaf persons. According to him, they communicate through facial expressions, saying, “If even you cannot sign, a smile to them is enough.”

He noted that as the only officer of the church with the PWDs, previously the total number of deaf persons was 43. However, the number has currently increased to 82 due to the creation of the Ministry to Persons with Disabilities (MPWDs). This, he believed, has led to many people bringing their families and friends who are equally in same state to church.

He thanked the Chairman of The Church of Pentecost, Apostle Eric Nyamekye, and the Koforidua Area Head, Apostle Samuel Osei Asante, as well as Pastor Akwasi Amo Afropong, Koforidua District Minister, for their immense support to the ministry.