You Must Be Little Jesuses – General Secretary Tells Christians 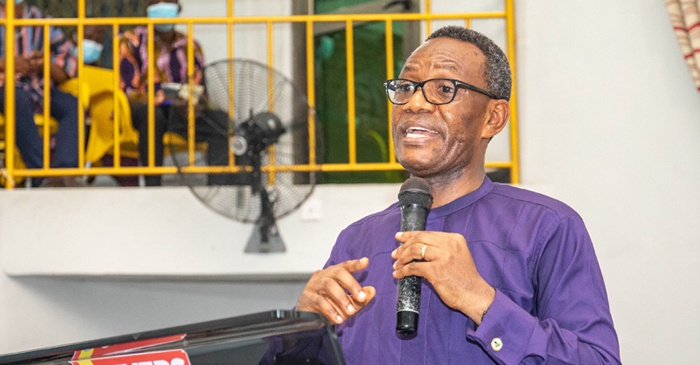 The General Secretary of The Church of Pentecost, Apostle Alexander Nana Yaw Kumi-Larbi, has entreated church leaders to be mindful of their actions, words, deeds, and attitude in order to ensure that they are in line with the standards of God.

“You must be little Jesuses everywhere you go,” the General Secretary stated yesterday when delivering the sermon in this year’s All Officers Retreat, dubbed: “Apostolisation” at Downtown Ofaakor, near Kasoa.

It is hosted by the Area Head, Apostle Dr. Benjamin Ali, with Apostle Mike Kwame Etrue (Kaneshie Area Head and Executive Council Member) as the other guest speaker.

Speaking on Wednesday on the topic: “Righteousness, the Authority of the Kingdom,” the General Secretary said it is righteousness that will help officers and ministers of the church to exert their authority in the church and impact others positively.

He regretted that most people in positions of authority, both in the church and in society as a whole, had lost the moral justification to exercise their authority as a result of their questionable lifestyles.

Reading from Proverbs 14:25; 19:17; Hebrews 1:8-9, he asserted that it is by only righteousness that the fortunes of the nation can be turned around and help the church in its quest to possess the nations with Kingdom values and principles, thereby bringing many people to Christ.

According to Apostle Kumi-Larbi, righteousness is a symbol of God’s Kingdom and that those who claim to be heirs of the Kingdom must be righteous in all their actions.

Explaining righteousness from the Old Testament perspective, he said that righteousness is being right with God by aligning with how God ordained things and how God sees them in the natural, moral or legal sense.

The General Secretary continued by entreating believers, especially officers of the church to put on the breastplate of righteousness (Ephesians 6:4) which signifies moral character and serves as their defense by way of protecting their hearts from evil.

Putting on the breastplate of righteousness, Apostle Alexander Nana Yaw Kumi-Larbi noted, is particularly important because the world is full of evil and sin (Romans 12:17-25; Matthew 5:38-42).

He disclosed that Jesus Christ came into the world to impute the righteousness of God in believers. This was done through the shedding of His blood and resurrection which has cleansed the believer from all unrighteousness, thereby sanctifying and justifying them (Romans 8:1-4; Galatians 3:13-14; Colossians 2:13-14; 2 Corinthians 5:21).

“We are now new creations having been made the righteousness of God. We are God’s righteousness because anyone who accepts Christ as his Lord and Saviour receives a new identity in Christ. God imputed His righteousness in us, and we are to reflect it in our communities. With the image of Christ in us, we should be able to influence others,” he said.