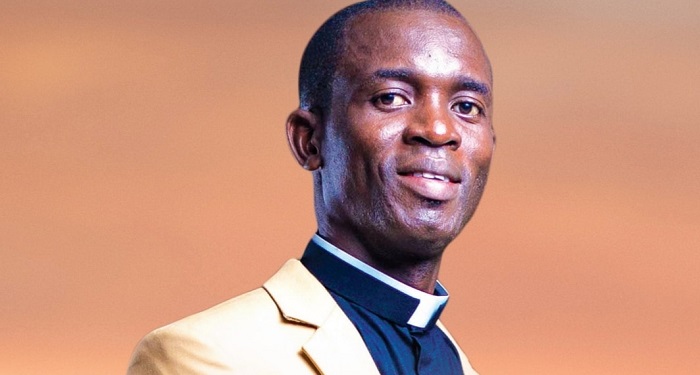 A mammoth gathering of bereaved relations, ministers and members of The Church of Pentecost as well as staff and students of Pentecost University thronged the funeral grounds of the late Pastor Jonathan Kofie on Saturday, July 17, 2021, to bid their final farewell to the departed minister.

Until his sudden home-call on June 20, 2021, Pastor Jonathan, 43, served as the Dean of Students  at the Pentecost University and the Resident Minister of Pentecost International Worship Centre in the Odorkor Area (PIWC-Odorkor).

Comforting the grieving crowd, the Chairman of the church, Apostle Eric Nyamekye, reiterated the need for Christians to be hopeful in the resurrection, stating that: “Long life is the desire of all, but a life that is well-lived does not depend on how long one lived on earth.”

Touching on the impact of Jesus’ short ministry on earth, he noted that “Jesus’ 33 years of a good and purposeful life has changed humanity forever. His death was the most tragic. His (death) was a gruesome murder that was well-planned and pre-meditated. The heavens stood still and looked on as they tortured and killed him. He was buried because he died. But on the third day, he rose from the dead.

“Who would have thought that his death would bring salvation to humanity. He saves in death and after death. His resurrection is the hope of our calling. It is the foundation of the Gospel we preach. Take it out and our gospel has no value. But thank God, that Christ has, indeed, been raised from the dead.”

He further noted that God’s order of resurrection began with Jesus as the first fruit of all to taste the resurrection; after Him would come those who have gone to be with the Lord, followed by those who Jesus will come to meet alive on His return. Stressing that, “If Christ resurrected, then we also shall resurrect. This is the hope we have!”

Exhorting the gathering on the topic: “God is faithful,” which was inspired from Luke 24:13ff, the Kasoa Area Head, Apostle Ekow Badu Wood, urged Christians not to be perturbed by life’s challenges, but to keep their focus on God because He is always faithful and to trust that He will be with them in all circumstances.

He, therefore, encouraged all gathered, especially the bereaved family, to have faith in the Lord and trust that even in this difficult time Jesus is still with them.

The General Council, in a tribute, read by Apostle Dr. Daniel Okyere Walker (Executive Council Member and Tarkwa Area Head) described Pastor Jonathan Kofie “as a gallant soldier who executed his numerous tasks with diligence, total devotion and alacrity.  He was organised, a man of vision, focused, result-oriented, hard-working, humble, bold, approachable and a team player.

“His loyalty to the church and respect for authority was without question. This was particularly evident in his strict adherence to policies and decisions of the Executive and General Councils as well as his strong knowledge and avid application of the Pentecostal liturgy. We testify that these few years of his ministry were impactful and fruitful. He served meritoriously as a pastor, a Children’s Ministry worker, and also as a lecturer and Dean of Students’ Affairs at Pentecost University,” it further read.

He is survived by a wife and five children.