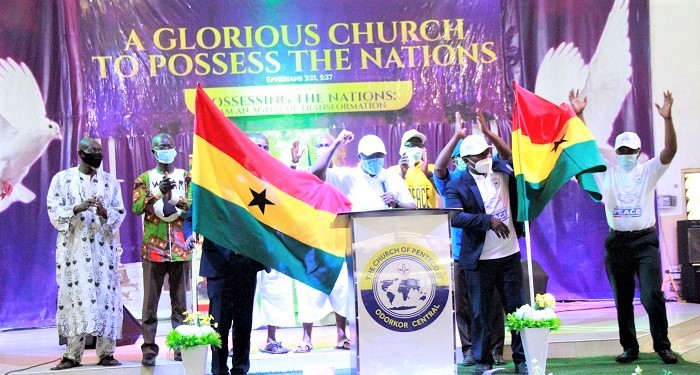 The Odorkor Area of The Church of Pentecost has launched the “Agent of Peace” campaign aimed at raising awareness on the need for peace before, during and after the upcoming presidential and parliamentary elections in Ghana.

The event, which took place on Sunday, October 25, 2020, at the Odorkor Central Assembly church auditorium, was chaired by Apostle Dr Dela Quampah, an Executive Council Member of the church, with ACP Baffour Apenteng Nyamekye, the Divisional Commander of Odorkor, as the guest speaker.

The launch also received support from the Ghana Pentecostal and Charismatic Council (GPCC) and the traditional rulers of the Odorkor township and its environs.

Scores of members of the church attired in branded caps and t-shirts, including the area pastorate and their wives, attended the event.

In his remarks, Apostle Dr Quampah said that Ghana remains a beacon for democracy in Africa, having organised six general elections in a peaceful, free and fair manner since 1992. He stated that the country has attained this enviable status because her citizens are generally peace-loving.

Apostle Dr Quampah further noted that the “Agent of Peace” campaign has, therefore, been initiated by the church to drum home the need for the citizenry to be agents of peace during this year’s general elections so as to maintain the tranquillity and stability in the country.

Quoting the key scripture for the campaign, Psalm 34:14, ACP Baffour Apenteng Nyamekye, in turn, emphasised the need for Ghanaians to shun all forms of violence before, during and after the elections in order to safeguard the peace enjoyed in the country.

According to the Odorkor Divisional Commander, one of the many practices that instigate electoral violence is the wrongful removal or defacing of posters and banners of political opponents.

He also advised the youth not to allow themselves to be used by political parties to perpetrate violence as a way of disrupting the polling process. He said that anyone found culpable in this regard would face the full rigour of the law and could face imprisonment or other stiffer punishments.

He also advised Ghanaians whose political parties or preferred candidates emerge victorious to be modest in their celebrations and be mindful of their utterances, stressing that “where your freedom ends is where another’s begins.”

ACP Nyamekye ended by assuring the citizenry that the various security agencies are well-equipped and very committed to ensuring that citizens obey the laws of the country to ensure a peaceful electoral process.

The Chairman of The Church of Pentecost, Apostle Eric Nyamekye, in a video broadcast shown at the event, asserted that after the fall of humankind, peace eluded the world, as a result, it (peace) can only be attained, when consciously pursued.

“Peace is an essential commodity as far as this world is concerned. However, since the fall, it has become foreign to us, so we need to seek and pursue it. That is why we are embarking on this peace campaign so that we will all be made aware that we need peace, especially during this year’s elections.”

“Let’s seek peace and pursue it for the sake of our families, friends and national stability. We all have one vote; let’s be content with that,” he advised.

Also present to grace the event were the GPCC representative, Rev. Emmanuel Nkrumah, the Chief of Odorkor, Asafoatse Osiakwan II, and the Chief of Gbawe, Nii Kwatei Abensu. They all took turns to encourage the congregants to be peace crusaders and to demonstrate their Christian virtues wherever they find themselves. They again urged all stakeholders – security agencies, political parties, the Electoral Commission and the citizenry – to contribute their quota towards a seventh successful election come December 7.

After formally declaring the campaign launched, Apostle Dr Quampah led the congregants to pray for the nations of the world, especially war-torn countries, and against the COVID-19 pandemic, which seems to be resurfacing in some parts of Europe.

The “Agent of Peace” campaign is an initiative of The Church of Pentecost to sensitise church members and Ghanaians about the need for peaceful elections and to educate them on their electoral rights and responsibilities. The campaign also aims at driving a sense of patriotism amongst Ghanaians.

The Odorkor Area “Agent of Peace” campaign launch was preceded by a float embarked on by the youth of the area to create awareness on peaceful elections within the Odorkor township.