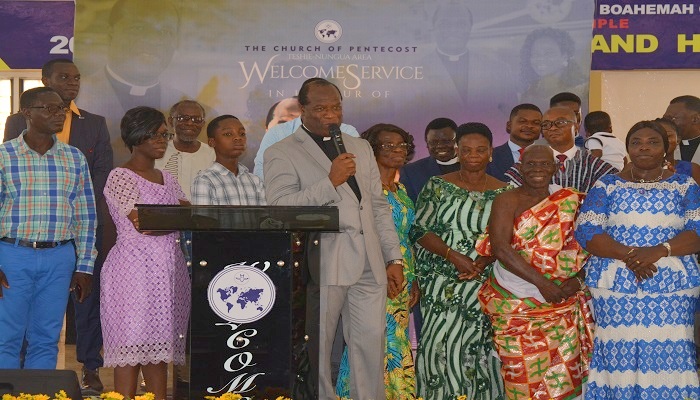 The Teshie-Nungua Area of The Church of Pentecost has held a special service to welcome the new Area Head, Apostle Dr. Alfred Koduah and family.

The service, which took place on Sunday, September 23, 2018, at the Agnes Boahemaa Gyimah Temple at Nungua, was officiated by Apostle Ousmane Patinde Zabre, the National Head for Togo and Member of the Executive Council.

Apostle Dr Koduah is on transfer from Takoradi Area. He has served the Church for 34 years in various capacities such as the National Head for Zambia, General Secretary, Board Chairman of the Pentecost University College, among others. He replaces Prophet James Osei Amaniampong who now heads the Asokwa Area in Kumasi.

In a sermon on the topic, “God’s Appointed Time,” Apostle Ousmane Zabre explained that, God has an appointed time for divine visitation, to accomplish what He has promised His people, and to judge the evils of the world.

He quoted various scriptures including Genesis 18:1-14, Daniel 11:32, Jeremiah 9:23-24, Matthew 19:26, among others. He said that one important element in the life of Abraham was his knowledge of God.

He therefore encouraged Christians to have unwavering faith in God, because human limitations cannot stop God from delivering on His promises. He also urged members in the Area to receive the new Area Head as one who speaks for God. “If you receive a prophet of God you will receive the same reward as a prophet,” he said.

Abraham, he explained, was meditating when he was sitting in front of his tent, having deep thoughts about his life and his wife’s inability to bear him a child, but while he was doing that, God had an appointed time for him.

“The knowledge of God helps Christians to resist the devil, and help God accomplish His purpose and plans in the lives of His children just as He did for Abraham and his wife Sarah in His appointed time,” he stressed.

In his response, Apostle Dr. Koduah read Philippians 2:1-5, and encouraged all to have the same mindset as Christ Jesus, serve God and do His work with good intentions.

The service brought together the entire pastorate in the Area and from other Areas. Also present was the wife of the immediate past Chairman of the Church, Mrs. Grace Opoku Onyinah, among others.