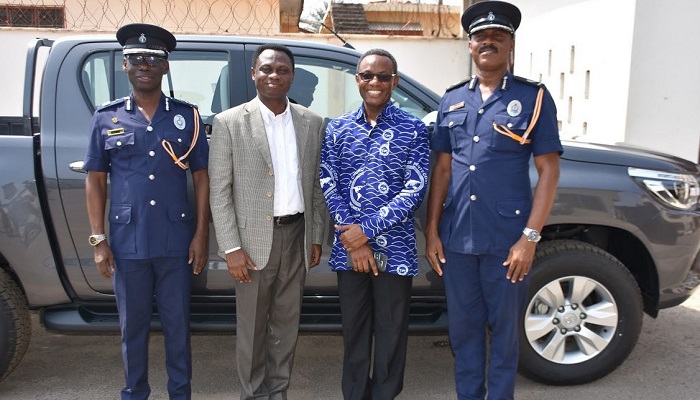 In line with the vision to possess the nations, The Church of Pentecost, on Thursday, December 13, 2018, donated a brand new Toyota Hilux vehicle to the Ghana Police Service.

The vehicle was handed over to officials of the Police Service on behalf of the Church by the General Secretary, Apostle Alexander Nana Yaw Kumi-Larbi, at a short presentation ceremony at the Church’s Headquarters at La in Accra.

Speaking at the ceremony, the Chairman, Apostle Eric Nyamekye, said that The Church of Pentecost, through her vision for the next five years dubbed “Vision 2023,” aims to possess the nation by affecting every sphere of life with Kingdom principles and values.

He said that the donation underpins the Church’s commitment to contributing her quota to national peace and development. He also acknowledged the efforts of the Ghana Police Service in maintaining peace and order in the country and was hopeful that the vehicle would go a long way to aid them in their work.

He said that it is the vision of the Church to partner and support the Ghana Police Service to equip them to be able to serve the citizenry well. He also hinted of the Church’s vision to put up Police Stations in some selected parts of the country within the next five years.

Receiving the vehicle on behalf of the Inspector General of Police, DCOP Alex Amponsah Asiamah (Director General, Services), commended the Church for fulfilling their promise to support the Ghana Police Service and urged other faith-based organisations to emulate this noble gesture.

The Church of Pentecost has in the past supported the Ghana Police Service in effectively discharging its duty to maintain peace and security in the country. It would be recalled that in 2017, the Church constructed a District Police Headquarters and Police Barracks at Millennium City, near Gomoa Fetteh in the Central Region for the Police Service. In addition, the Church has provided IT equipment and vehicles for the Service and has also donated an ambulance to the Police Hospital.

Present at the ceremony was ACP Teye Cudjoe (Director, Projects).