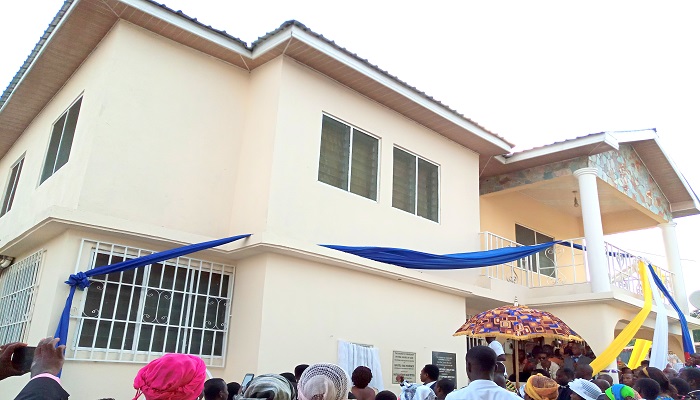 The Chairman of The Church of Pentecost, Apostle Eric Nyamekye, has dedicated the Akuapem Mamfe District Mission House in the Koforidua Area.

The Mamfe District was created in 2015 from the Akropong District. The foundation stone of the building was laid by Apostle Kingsley Miah, the then Koforidua Area Head.

In a sermon titled, “Importance of a Home” taken from Luke 15:17-20, 25-31, Pastor Ebo Baiden of Adukrom District, explained that a home is a place of rest. He noted that after a day’s hard work, everyone should have a home where they will rest and regain vitality to continue life.

“It is important therefore, to put up a place for the man of God and his family to have a place to rest and regain vitality to continue the divine assignment given them,” he indicated.

Pastor Baiden mentioned that there are blessings associated with building a house for ministers of the gospel. He quoted from 2 Kings 4:8-17 and explained that the Shunammite woman and her husband were blessed after putting up a place for Elisha, the prophet of God.

He encouraged all Christians to support Kingdom projects, especially when it comes to building mission houses and church auditoriums.

He commended the members and officers of the Mamfe District for their hard work and their zeal towards putting up a decent place for the district.

The Chairman, Apostle Eric Nyamekye, on his part, commended the Chief of Mamfe and Kyidomhene of Akuapem Traditional Area, Osabarima Ansah Sasraku III, for gracing the occasion.

Also present were the ministers and wives in the Koforidua Area, among others.