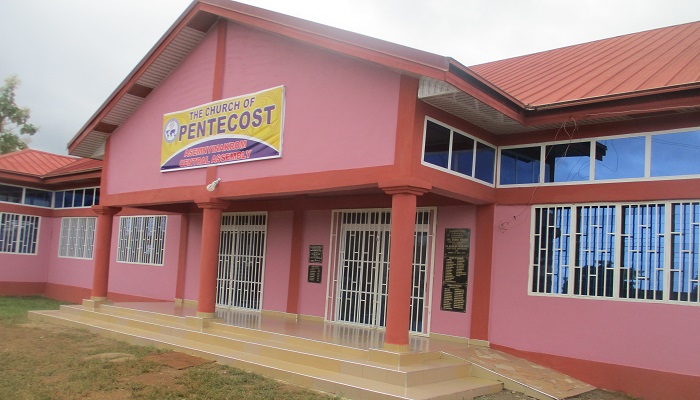 It was all joy when the ultra-modern church building of Asemnyinakrom Central Assembly in Essam-Debiso Area was dedicated on Sunday, July 15, 2018.

The building was dedicated by the Area Head, Apostle Derek Kwaning Mireku, and assisted by the Asemnyinakrom District Minister, Pastor Benjamin Narh Nobi.

The 1,500-seating capacity church building, which has been described as “second to none in the Essam-Debiso Area”, is disability friendly and comprises a 50-seater conference hall, a sound control room, an equipment room, ultra-modern toilet facilities as well as offices for the District Minister and administrative purposes.

The total cost of the building was estimated GH₵219,727.00, funded through grants from the Headquarters and Area, District and Local Offerings and donations from individuals.

In his remarks, Apostle Mireku commended the leadership of the Church (Executive Council) for their financial contributions towards the infrastructural development of the Church, especially in Essam-Debiso Area. He also commended all present and past Asemnyinakrom District Ministers and the entire membership of the District for their selfless contribution towards the project.

In a sermon delivered at the dedication service based on Matthew 5:13-14, Apostle Mireku entreated members to lead Christ-like lives because they are the salt of the earth and the light of the world. He further stressed that just as members see the beauty of the ultra-modern Church building, they should lead their lives so that they would become worthy vessels which would reflect the beauty of Jesus to the world in order to draw lost souls to the saving knowledge of Christ.

Present at the event were the Essam-Debiso Area pastorate and their wives, Chiefs and Elders of the traditional area, and a representative of the District Chief Executive (DCE) of the Bia-East District in the Western Region.