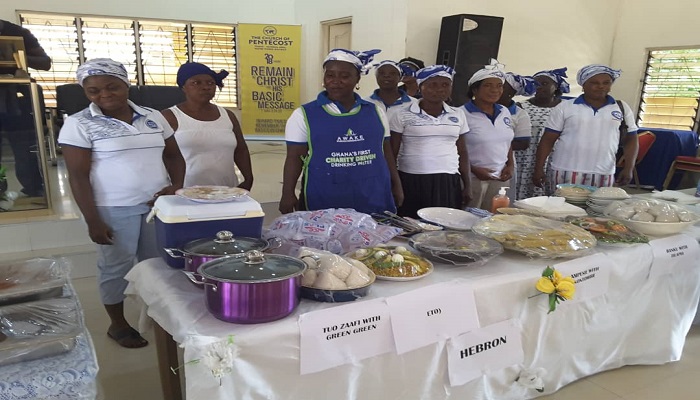 The Teshie Water Works District Women’s Ministry in the Teshie-Nungua Area of The Church of Pentecost has organised a food bazaar as part of the activities to invigorate the ministry.

The event, which attracted massive participation by members of the ministry from the three assemblies in the districts, namely Elim (Central), Hebron and Emmanuel Parker assemblies, took place on Friday, December 7, 2018, at the Elim auditorium.

According to the District Women’s Ministry Leader, Deaconess Cecilia Appiah, the event was to promote quality cooking among the members and to expose them to the various continental and local dishes. This, she said, was to sharpen the cooking skills of those who want to take up cooking as a career.

Deaconess Appiah explained that a number of skills training programmes have been earmarked to be taught in the ministry to equip women in the district with employable skills in order to support themselves and their homes.

At the end of the competition, participants from the Hebron Assembly emerged winners, followed by Elim and then Emmanuel Parker assemblies.

This year’s food bazaar was taken to another level following the invitation of a seasoned chef in the hospitality industry, Elder Joshua Tetteh of D. K. Arnan Worship Centre, who provided a professional touch to the event. He was the sole judge for the competition.

Present at the event were the District Minister, Pastor Emmanuel Ayisi Mensah and his wife Rubby, some members of the District Executive Committee, officers of the Church, among others.