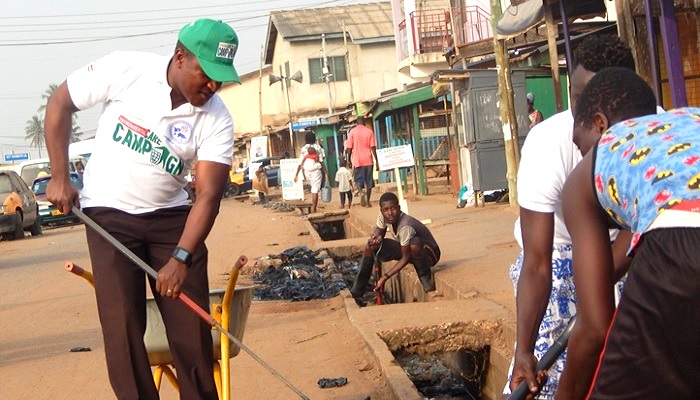 The District Chief Executive (DCE) for Ablekuma Central, Hon. Samuel Brako Amoafo reaffirmed his faith in Jesus Christ during the launch of the Environmental Care Campaign by Russia Worship Centre (RWC) in the Dansoman Area of The Church of Pentecost.

The event, which took place on Friday, December 7, 2018, at the RWC auditorium, was attended by members of the Church as well as other churches within the jurisdiction of the Local Council of Churches, Russia, headed by Apostle Eric Nii Duodu.

The RWC Environmental Care Campaign, which was launched by the Resident Minister, Pastor Abraham Addae Agyemang, aims at eradicating the sanitation and environmental challenges within the Russia community in Accra.

Addressing the gathering, Pastor Abraham Addae Agyemang, thanked the leadership of The Church of Pentecost for such a needful intervention in solving sanitation problems in the various localities of the city of Accra and the nation as well.

He retorted that “as citizens of Heaven, we need to make our temporary home like that of our permanent home, while we are still on earth.”

On his part, Hon. Samuel Brako Amoafo, who doubles as the Assemblyman for the Electoral Area, expressed his joy and satisfaction at the initiative by the church to also join in the fight to eradicate poor sanitation

He called on the clergy to help sustain the vision of solving sanitation problems by organizing more clean-up exercises in the locality.

He further on declared his intention to be part of the family of believers in the church.

After the official launch of the sanitation campaign at the church auditorium, members embarked on a clean-up exercise in the community.

The members also took the opportunity to evangelise to some residents of the community who took part in the clean-up exercise.

The event ended successfully with a clarion call on all members to ensure sustainability of the Environmental Care Campaign and see the campaign as an effective solution to the dreadful sanitation problems the country faces.

The Environmental Care Campaign is an initiative of The Church of Pentecost in collaboration with government and the waste management company, Zoomlion Ghana Limited, aimed at sensitizing the public about the need to take care of the environment. The campaign has as its slogan: “Environment Care; My Responsibility” along with the hashtag #CleanGhana