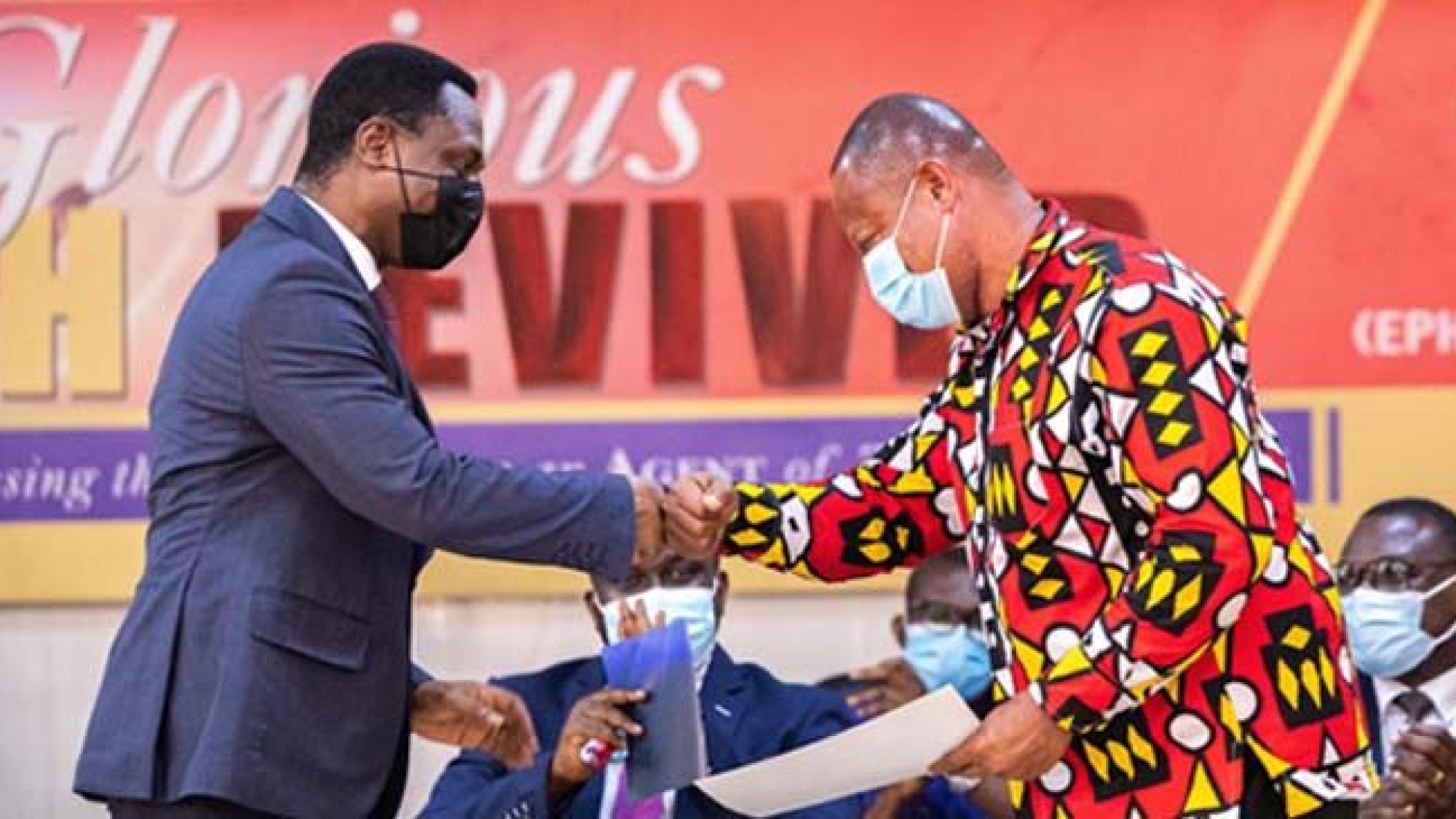 Management and Staff of The Church of Pentecost Headquarters ended this year’s activities on Wednesday, December 22, 2021, with an award and retirement ceremony which saw Elder Ebenezer Anim-Yirenkyi, a Principal Accounts Officer at the Pension Office, and Elder Daniel Asumadu Sakyi, also a Principal Accounts Officer at Asokwa Area Office in Kumasi being crowned as the joint recipients of the Chairman’s Best Workers Awards for the year.

The Chairman of the church, Apostle Eric Nyamekye, presented the prizes to the duo amid cheers from the staff and other attendees of the annual ceremony which took place at the Sophia McKeown Temple at La, Accra.

Giving his Christmas and end-of-year address, Apostle Eric Nyamekye wished management and staff well in the Yuletide and prayed for a prosperous new year.

Revealing the essence of Christmas, Apostle Nyamekye said that Christmas brings glory to God just like the angels sang in Luke 2:14. Because of this, he said, the devil is doing all he can to take people’s mind off  Christ and make the season a mere holiday, a period of feasting and merrymaking, as the European Commission has attempted and still pushing hard to expunge the word ‘Christmas’ and simply keep the period as a holiday.

Notwithstanding all these deliberate attempts to downplay the importance of Christmas, the Chairman called on Christians not to gloss over the fact that Christmas is a season God is glorified by the celebration of the birth of His Son Jesus Christ which enforces the fact that Jesus is not a founder of a religion but the Saviour of the world.

“It is, therefore, proper that Christians gather in this season if they can, to celebrate the birth of Jesus, the Saviour of the world, worship at His feet, lift Him up as the king of all gods and tell of His love to the world. This brings so much honour to our God,” he said.

In an exhortation, the International Missions Director, Apostle Emmanuel Agyemang Bekoe, spoke on the topic: “Golden Shields” based on 1 Kings 14:27; 2 Chronicles 12:10.

He explained that King Rehoboam replaced the lost golden shields his father Solomon made with bronze shields after King Shishak of Egypt came up and attacked Jerusalem.

Deducing some lessons from what King Rehoboam did, Apostle Agyemang Bekoe noted that by replacing the golden shields with bronze, King Rehoboam replaced conviction with convenience, control with compromise, value with vanity, and glory with a glow.

On control and compromise, he stated that when standards are compromised, control is lost. He said in Rehoboam’s time, there was no control because he replaced the golden shields with bronze shields.

He also said by replacing value with vanity, King Rehoboam traded worth for worthless, saying, “In an organisation, we need to value what we have and jealously guard them.”