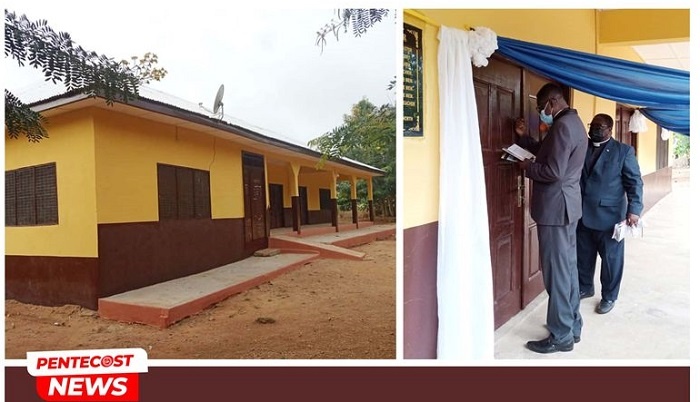 The Sunyani Area Head of The Church of Pentecost, Apostle Mark Obeng Andoh, on July 26, 2021, dedicated a newly constructed school block fully funded by the church at the Duayaw Nkwanta M/A Pentecost School. The facility was constructed at the cost of GH¢53,102.00.

The school, which was established by the church in 1989, was handed over to the Ghana Education Service on 27th September 1994. Consequently, it had its name changed from Pentecost Preparatory School to M/A Pentecost Primary School. It started with eight pupils but currently, it has a student population of 360, made up of primary and junior high school departments.

A temporal wooden structure that served as the KG block became weak and not conducive for teaching and learning. Through the instrumentality of Apostle Obeng Andoh, the Pentecost Social Services (PENTSOS) came in to support the project.

In a brief address at the commissioning ceremony, the Municipal Director of Education, Mrs. Veronica Adu Saforo, commended the church for contributing to the development of the nation.

“The Church of Pentecost over the years has contributed to almost every facet of human endeavour which includes the drilling of boreholes, construction of modern prison settlement camps, construction of hospital blocks and school buildings which Duayaw Nkwanta is witnessing one today.

“Indeed, your church is a development partner in bridging the infrastructural deficit of our country,” she said.

According to her, the facility is important because it would go a long way to enhance teaching and learning in the school and boost enrolment and attendance.

In attendance were Mrs. Juliet Obeng Andoh (wife of the Area Head), Pastor Mawuena Akoto (Duayaw Nkwanta District Minister), the Area Pastorate as well as the staff and pupils of the school.