36-year-old Kwesi Ackon, the honest taxi driver who has been celebrated the world over for returning a huge amount of money he found in his taxi to its owner, has been employed by The Church of Pentecost General Headquarters in Accra, Ghana.

On his first day at work on Thursday, June 16, 2022, Ackon, who could not hide his joy over the job offer, expressed his heartfelt thanks and appreciation to God and the leadership of the church, particularly the Chairman, Apostle Eric Nyamekye, and the General Secretary, Apostle Alexander Nana Yaw Kumi-Larbi, for the opportunity to work at the head office of the church.

According to him, working at the church’s headquarters would further build his Christian faith and values.

Kwesi Ackon also thanked many Ghanaians who donated various sums of money and items to him when the news about the issue broke out.

The news of Kwesi Ackon went viral a few weeks ago after he returned an amount of GHS 8,400.00 he found at the back of his car to the owner. He picked the trader, an old fishmonger, from the Mallam Atta Market in Accra to her residence at Teshie on Easter Saturday.

The old woman, who had no hope of retrieving the said money, wept profusely and invoked the blessings of God upon Kwesi Ackon when he voluntarily traced her at her residence on Easter Sunday to return the money to her.

This act by Kwesi Ackon which was captured on video went viral and subsequently caught the attention of the Vice President of the Republic, His Excellency Dr. Mahamudu Bawumia, who donated GHS 20,000.00 to him. Some organisations and individuals who were touched by the gesture have since donated several amounts to him, prominent among them was Rev. Lawrence Tetteh who donated a brand new Daewoo Matrix to him.

The icing on the cake is the employment offer given him by The Church of Pentecost Headquarters.

Kwesi Ackon is a member of The Church of Pentecost and fellowships at the Onyeametease Assembly in the Kokomlemle District in the La Area of the church. 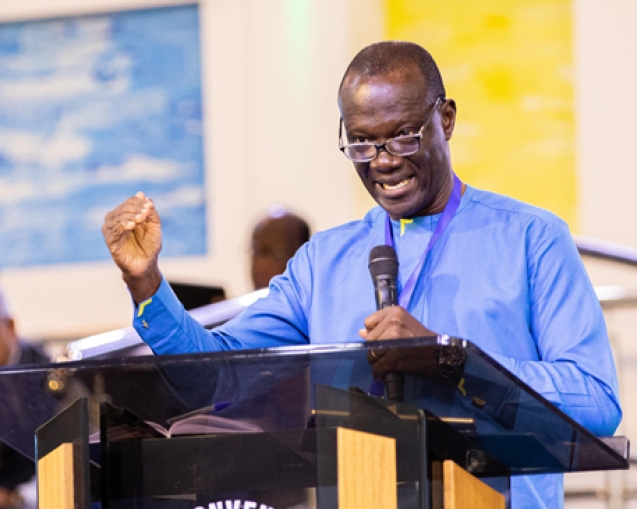