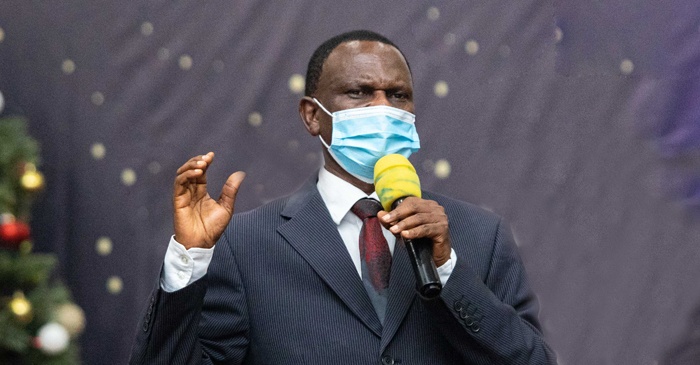 The Teshie-Nungua Area of The Church of Pentecost has organised a special programme dubbed ‘Rhema Conference’ at the Fred Stephen Safo Memorial Temple, Nshorna, Nungua.

The programme brought together ministers and members from all 26 districts in the Area to listen and share the word of God preached across the Area on 31st December 2021 Watch-Night Services.

Each of the pastors in the Area gave a summary of the sermons they preached on 31st Night.

“It is important for us to take note of what God said to all members of the Teshie-Nungua Area through the men of God who preached that night,” the Area Head, Apostle Wilberforce Nkrumah Agyemang, stated in a sermon.

Apostle Wilberforce Nkrumah Agyeman who preached at Agnes Boahemaa Gyimah Temple on December 31st spoke on the topic, “Do me special favour,” on the story of Othniel’s conquest, his marriage to Caleb’s daughter Aksa and her request for springs leading to her father gifting her the upper and lower springs of water recorded in the book of Joshua 15.

“Caleb was old but felt strong in his body that he was more than delighted to grant his daughter her requests,” he said, adding, “Just as Caleb’s daughter asked her father for a special favour and he willingly granted, God will also grant the requests of all who ask of him for special favours.”

Tonight it is my prayer that God will do you a special favour and grant your request in the area of health, promotion at work, in your marriage, in your school, in any interview you are attending and in all aspects of your life,” he said.

Prophet Fred Antwi of Baatsona District on 31st December also preached on the topic: “The road leading to your victory is under construction.” He urged members to seek the face of God as their victory is near. He quoted Romans 8:1-37 and said: “There will surely be a commissioning ceremony; it is a year of battle and testimonies as well.”

Apostle Rigwell Ato Addison (Retd), former General Secretary of The Church of Pentecost, also preached at E. D. Aninkorah Worship Centre at the Teshie Military Camp. He indicated that the supernatural star of God that leads his people will never be defeated, quoting from Luke 2:11.

“The shepherds were stars in their own right, but they saw a supernatural star which when they followed led them to their sought-after destination,” he said.

He added: “God should open our eyes to see the supernatural star, and the significance of the gifts presented to Christ such as the gold should take poverty away from us, the frankincense should anoint us with fresh oil and the myrrh should take away any problems in our lives.”