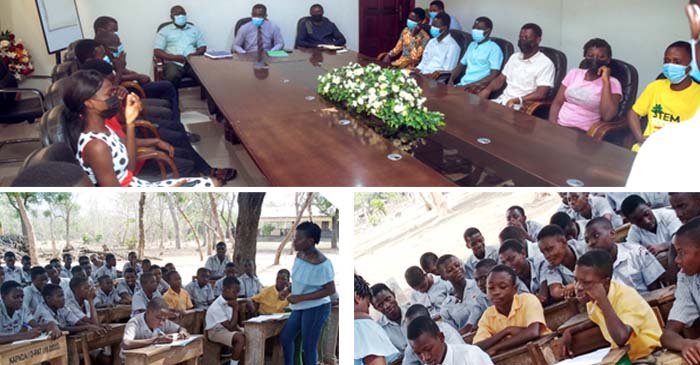 Educational intervention rolled out by Pentecost University in Afram Plains in the Eastern Region has yielded enormous benefits for the beneficiary communities.

The intervention, which was in the form of teaching support and missionary work, was in collaboration with the Afram Plains Area of The Church of Pentecost, and the Education Directorates of the Afram Plains North and South Districts.

To this end, the University sent some of its most brilliant, disciplined and people-centered students to teach in schools in the area during the first semester vacation. The education directorates in the beneficiary districts in turn posted the students to the schools that really needed the services of teachers. Some of the beneficiary communities and schools include Ntonaboma, Adorkope, Kpatalidzakope, Mafi Abiw Kope, Zikpo Nyuinyui, Abomasarefo among others.

Before the students embarked on the mission, the Vice-Chancellor of the University, Apostle Prof. Kwabena Agyapong-Kodua, at a brief ceremony said the project is aimed at supporting education in rural communities with teaching services, and also exposes the students to rural life and realities of challenges that they are being prepared to solve.

The VC added that the project is also part of The Church of Pentecost’s vision to equip the Church to possess the nations for Christ.

“Through this, young people are being exposed to real-life missions’ activities and interventions that are required to glorify the name of Christ Jesus…” the VC stressed.

Briefing the Management of the University upon return from the field, the students said they were warmly received by the leadership of The Church of Pentecost in the area as well as the education directors and the District Chief Executive (DCE) of Afram Plains North.

Meanwhile, the Afram Plains North District Director of Education, Solomon Akuruko Azubila, has commended the University for the initiative, describing the intervention as timely for the schools in the area.

The students also briefed the University on their missionary work, including home and schools’ outreaches. According to them, 48 persons converted to Christianity within the period, out of which 12 were baptised in water.

In sharing their personal experiences, the students said they were touched and humbled by the exposure. They also expressed concerns about the state of education and development in the area.

James Jabon, who was posted to Amankwahkrom JHS, was sad about the lack of teachers in the school. “It breaks my heart that the school that I posted to had only one teacher, and I find such a situation jeopardizing to the future of the pupils,” he said.

Mr. Jabon called on the media to focus on places like that to draw government’s attention to the plight of the people.

On her part, Abigail Adjabeng, who was posted to New Kyeiase R/C Primary School, felt like going back to the village to teach the children. According to her, though her stay was short, she could feel that her departure created a huge vacuum in the school since they did not have adequate teachers.

She called on the authorities to pay attention to education in rural communities.