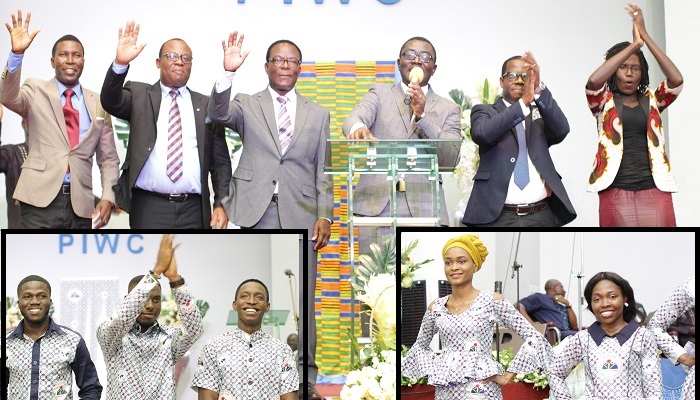 The Youth Ministry of The Church of Pentecost on Monday, June 11, 2018, officially launched the National Youth Week for this year.

The event, which took place at the Kaneshie-PIWC auditorium in Accra, also saw the unveiling of the new cloth for the ministry.

Addressing a crowd of ministers, ministers wives and youth leaders in the Greater –Accra Region, the Youth Director, Apostle David Nyansah Hayfron stated that this year’s National Youth Week celebration, which will be observed from July 9 to 15, would be under the theme “Remain In The Anointing” taken from 1 John 2:20-27.

Apostle Nyansah Hayfron concluded by saying: “The anointing is like a magnet and a magnetic substance. The more a magnetic substance (believer) gets closer to the magnet (Jesus), the more magnetic (anointed) it becomes, but a non-magnetic material (unbeliever) will never be magnetised no matter how close it may be to the magnet.” He added that “God expects us (believers) to impact lives after we have been anointed by preaching the word of God.”

After the exhortation, Apostle David Nyansah Hayfron, with the assistance of the Deputy Youth Director, Elder Amos Kevin-Annan, as well as other members of the National Executive Committee of the Youth Ministry, declared the National Youth Week celebration officially launched.

The new cloth, which bears the three main colours of the ministry: Red, Blue and Green, was officially unveiled by the wife of the Youth Director, Mrs Sheila Nyaniba Hayfron amidst wild cheers from the audience.

Apostle Nyansah Hayfron revealed that a yard of the new cloth goes for GH₵18.00, hence the full piece of cloth (12 yards) would be sold at GH₵210.00.

While urging the youth to patronise the new cloth, the Youth Director also stressed that the introduction of the new cloth does not render the old one outdated or useless. He said that both clothes are accepted as the official clothes of the Youth Ministry and can be worn to observe the impending National Youth Ministry Week celebration.

Pastor David Amankwah, a member of the committee tasked to come out with the new Youth Ministry Cloth, explained that the features and colours on the cloth make it suitable for all age groups and persons.

According to him, the dominant colours found on the cloth – Red, Blue and Green – are all primary colours of light. This, he noted, shows that the Christian youth is truly the light of the world since without them; the world would be in darkness.

The Red, he explained, represents the torch/tongue of fire and the presence of God in the life of the believer. The Green paints the picture of the growth of the youth in faith and love, whiles the Blue colour in the cloth signifies the peace and serene environment the Christian youth provides.

Present at the event was the first Director of the Youth Ministry of the Church, Apostle D. K. Noble-Atsu (Retd.), as well as the various Ministry Directors of the Church: Apostle Dr Jimmy Markin (Evangelism), Apostle Emmanuel Ofei Ankra-Badu (PEMEM) and Apostle Fred Tiakor (Children). Also in attendance were Youth Pastors in the Greater-Accra Region and some minister’s wives. The event was also viewed by thousands of people across the globe who followed proceedings via a live feed on the official Facebook page of The Church of Pentecost.