We Are Proud Of Our Leaders – Ghana Flag Women Confess 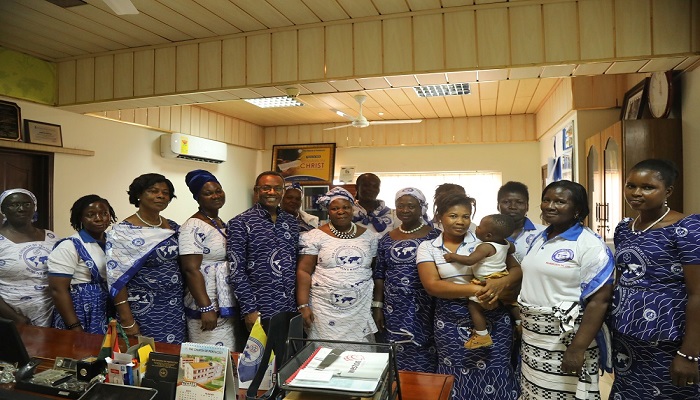 We Are Proud Of Our Leaders – Ghana Flag Women Confess

The leadership of The Church of Pentecost, led by Apostle Professor Opoku Onyinah, has been highly applauded for their sterling administrative acumen and excellent management of the Church resources.

The applause was given by members of the Women’s Ministry of the Ghana Flag Worship Centre in Kasoa Area during a tour of the Headquarters at La, Accra on June 14, 2018.

Speaking on behalf of the group, the District Women’s Ministry Leader, Deaconess Esther Peterson, pointed out that the massive infrastructural development that the Church has witnessed in recent times, the high spiritual growth at all levels and the unique leadership style of the principal officers (Chairman, General Secretary and the International Missions Director), among others, have contributed largely to enhancing the image and reputation of the Church.

“We want to use this opportunity to commend the leadership of this church for the enormous work that God is using them to do. Their sound teachings, the prudent management of the resources of the church and the many infrastructural development we see around us attest to the fact that they have been a blessing to the Church and humanity,” Deaconess Esther Peterson stated.

According to her, members now feel proud to belong to the Church and are eager to introduce it to non-members so as to win them for Christ.

The General Secretary, Apostle Alexander Nana Yaw Kumi-Larbi, also commended them for their unalloyed commitment to the Church and the work of God. He took time to explain questions posed by them bordering on the administration of the Church.

The visit also took them to the Office of the Chairman, where they were addressed by the Personal Assistant to the Chairman, Apostle Samuel Otu Appiah.

At the Missions Office, they were addressed by the Principal Executive Assistant to the IMD, Mrs. Victoria Kumi Woode.

They also visited the Women’s Ministry Directorate and the studios of Pent TV.