US To Restrict Visas To Ghanaians

Home - News - US To Restrict Visas To Ghanaians 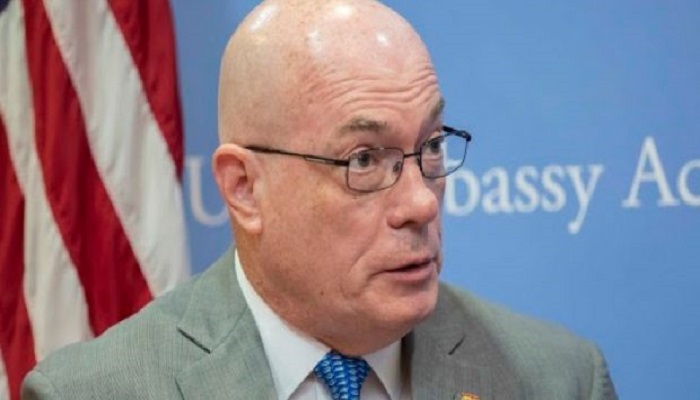 US To Restrict Visas To Ghanaians

The United States (US) government has threatened to impose visa restrictions on Ghanaian citizens.

According to the US government, Ghana government was not complying with international obligations regarding the issuance of travel documents to Ghanaians awaiting deportation in the USA.

In a statement issued to the media on Wednesday, June 20, 2018 by the US Embassy in Accra, the US said, it will be forced to begin implementing the visa restrictions in accordance with U.S. law as a responsibility owed to the American people.

The statement said, the Government of Ghana became a signatory to the Convention on International Civil Aviation which obliges Ghana through its Embassy in Washington, D.C., and its Consulate General in New York to interview deportees on a regular basis and issue the necessary travel documents.

“This helps to facilitate deportees’ departure on commercial flights. When the Government of Ghana fails to meet its ICAO obligation regarding the regular issuance of travel documents, the U.S. government is forced to employ charter flights for deportations. The Government of Ghana has the power to reduce, or even end, the use of charter flights by meeting its obligation to issue travel documents in a timely manner,” the statement said.

“In December 2016, the U.S. Department of Homeland Security (DHS) identified Ghana as being at risk of non-compliance on removals of those under deportation orders. Since then, the U.S. government has repeatedly engaged the Government of Ghana in both Washington, D.C., and Accra and has urged the government to abide by its international obligations and issue the necessary travel documents so that Ghanaians under deportation orders may depart the United States on commercial flights. If Ghana fails to comply with international obligations regarding the issuance of travel documents, the United States may be forced to begin implementing visa restrictions on Ghana, in accordance with U.S. law.

“The United States of America takes its legal and human rights obligations very seriously. In the course of enforcing U.S. immigration laws, the U.S. government would strongly prefer that individuals under deportation orders depart the United States via commercial air carriers, as regular passengers. We encourage Ghanaians to abide by legal processes if they seek to immigrate to the United States. We commend the Government of Ghana for taking steps to promote private sector growth that will create employment opportunities for Ghanaians; foster even greater security; and ensure a promising future for Ghana’s youth, thereby minimizing illegal immigration to the United States”.

In September last year, US President Donald Trump’s administration announced new visa standards, saying it will discontinue blanket bans in favour of restrictions based on factors like whether countries share information about travelers’ criminal histories or use electronic passports with embedded traveler information.

At the time, the US government said it would consider lifting restrictions on one or more countries if they “have improved their identity-management and information-sharing protocols and procedures,” according to the proclamation.

Miles Taylor, the counselor to acting Homeland Security Secretary Elaine Duke, said: “The goal is not to indefinitely block certain nationals from coming to the United States. It is to protect Americans until foreign governments do comply with our standards and no longer pose a risk.”

“We had a range of countries, from total willful noncompliance and nonengagement to countries that maybe couldn’t meet the requirements but were interested in doing so,” Taylor said last week. “Some countries didn’t even have the courtesy to say, ‘Go fly a kite.’”

The order also blocked visas for government officials on business or tourist travel from Venezuela. For Somalia, the order blocked visas for immigrants and provided that other travelers will be subject to extra scrutiny.