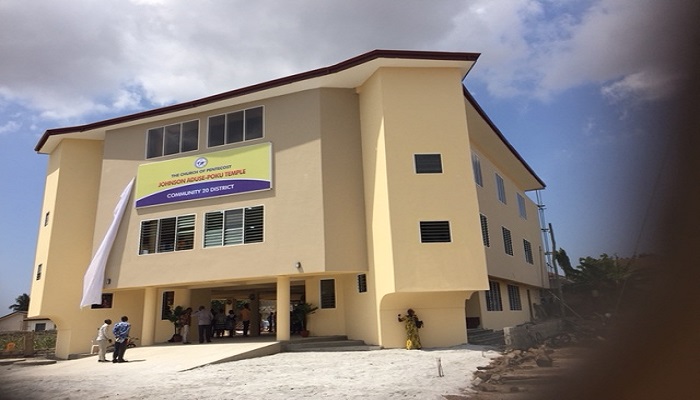 The Area Head of the Teshie-Nungua Area of The Church of Pentecost, Prophet James Osei Amaniampong, on August 8, 2018 dedicated two ultramodern church buildings in the Community 20 District.

He was assisted by the Community 20 District Minister, Pastor Enoch Nii Akrashie, and other ministers in the Area.

One of the church buildings situated at New Kotobaabi was named after Elder John Anim-Sampong, a dedicated man of God who served God with passion.

In a sermon on the topic, “What Impressions Are You Leaving Behind?” Prophet Amaniampong stated: “We are all writing our stories, and one day posterity will say a good person once walked on this earth. Everybody wants people to say good things about them; we all want to be praised for doing good things.”

Reading from Mathew 16:13-20, he urged believers to pursue good deeds in humility just as Jesus Christ did when He left His glory in heaven and took upon Himself the status of a servant on earth.

The Area Head said the church decided to honour the memory of the late elder by naming the building after him due to his good deeds.

“Society becomes comfortable when some caliber of people exit their lives, others become worried when some depart,” he said, while urging Christians to pursue good causes so that society will fondly remember them and honour them.

In a sermon on the topic, “An Outstanding Church,” Pastor Stephen Tetteh Nanor of the Community 16 District urged believers to be outstanding in their Christian lives.

The Church of Pentecost in Teshie-Nungua Area has seen unprecedented infrastructural development in the past five years in terms of church buildings, mission houses and others.

So far, 50 projects have been constructed with 47 dedicated under the leadership of Prophet James Osei Amaniampong. Most of the projects have been named after deceased ministers and their wives, as well as distinguished officers of the church who served faithfully.

Recently, three other buildings were dedicated. They are: Dorcas Barabu Memorial Courts, Robert Acquaah Temple in the Buade District and Harry Fayinka Temple, formerly Praise Assembly of the Sakumono District.