There Is Only One Truth – Apostle Kumi-Larbi

Home - News - There Is Only One Truth – Apostle Kumi-Larbi 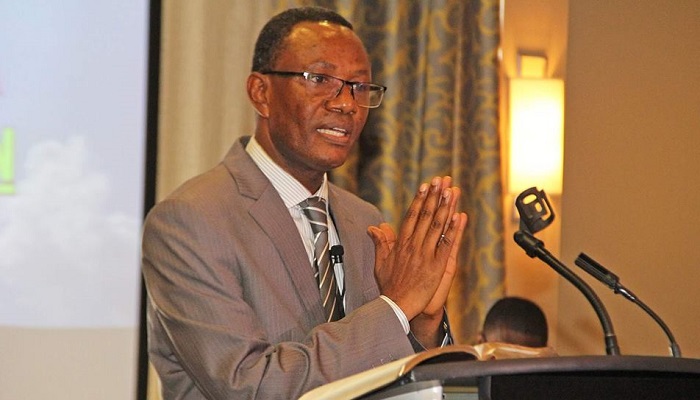 There Is Only One Truth – Apostle Kumi-Larbi

“Severe trials and temptations, coupled with the desire to know more have dissuaded people into believing doctrines outside of what Christ has taught us. Presently, there have been so many debates on irrelevant matters of Christianity in pursuit of knowledge and others in pursuit of supposed salvation.”

“All such doctrines are ‘no gospel at all’. There is basically nothing like the higher truth. The truth is one and is a person, Jesus Christ. He said: ‘I am the Way, the Truth and the Life, no one comes to the Father, except through Me.’ Any other Gospel aside this gospel is no gospel at all.”

This statement was made by the General Secretary of The Church of Pentecost, Apostle Alexander Nana Yaw Kumi-Larbi when he exhorted youth members of the Navrongo Zone on Wednesday, July 11, 2018, as part of his 3-day visit to the Bolgatanga Area.

Continuing his series on the topic: “Remaining in the Anointing; The Sure Way of Knowing the Truth” (1 John 2:18-19 and Galatians 1:6-9), Apostle Kumi-Larbi cautioned that even though false teachings attract people, it does not lead to the salvation of souls.

“Others may preach what people want to hear, but we, The Church of Pentecost, preach Christ and Him crucified”. We preach about the people’s Christ, the Christ who died for sinners, in simple language and in plain speech such that anyone can understand,” he said.

The General Secretary further noted that the Church believes in the four-square gospel message of Jesus Christ, which is “Jesus Christ our Saviour, Our Healer, Our Baptizer and Our Soon Coming King.”

“This is what we believed from the beginning and obtained salvation. What is left is for us to live a life that depicts the salvation we have received in order to appropriate our citizenship in heaven and also to attract others into the Kingdom,” he said and emphasized that any doctrine that does not direct people to Christ is no gospel of at all.

Touching on anointing, Apostle Kumi-Larbi noted that in the Old Testament period, pouring of oil over one’s head symbolized God’s empowering of the individual. He said that in the Bible, kings, high priests, priests, and occasionally prophets were anointed. Also, sacred objects in the temple were anointed to dedicate them to God. He said that the anointing is closely related to the presence and power of the Holy Spirit.

Apostle Kumi-Larbi explained that the Holy Spirit represents the anointing of God in the New Testament age. “Jesus is the Messiah, the Anointed One, who was anointed by the Holy Spirit. He is also the One who pours out the Holy Spirit on his people (John 15:26 / John 16:7). So when John speaks of the ‘anointing’ in 1 John, he is obviously speaking about the Holy Spirit that each member of the congregation had received,” he stated.

The General Secretary said that the Holy Spirit was given to believers to teach them and lead them to the truth. According to him, this was why John concluded his lesson by encouraging his readers to trust the Holy Spirit who is leading and teaching them.

He explained that since the Holy Spirit is the truth, His presence in the lives of believers, which is the “anointing”, alerts them to the false doctrine of those who oppose Christ, and rather points them towards the truth of the true faith.

“If the Holy Spirit teaches us, do we need human teachers? Is John telling us to reject teachers altogether and rely solely on the Spirit? No. What he is saying is that we ought to reject the antichrist group that is attempting to spread their heresy and oppose teachings of the ‘deeper truths’ of God. The Holy Spirit in us will remind us of what Jesus taught us and lead us. We don’t need the false teachers,” he said.

Apostle Kumi-Larbi further clarified that teachers, whose job is “to equip the saints for the work of ministry, for building up the body of Christ” (Ephesians 4:12), are among the other gifts God has placed in the church.

He, however, added that although godly teachers are essential to the work of the ministry, Christians should not only rely on them to feed them, but rather look to the Holy Spirit to nurture and sustain them as they attain maturity in Christ.

Apostle Alexander Nana Yaw Kumi-Larbi concluded his message by advising Christians to discern false teachers, trust actively in the Holy Spirit to teach them and to guide them, and remain or abide in Jesus Christ the Savior because their safety and security are bound up in Him.