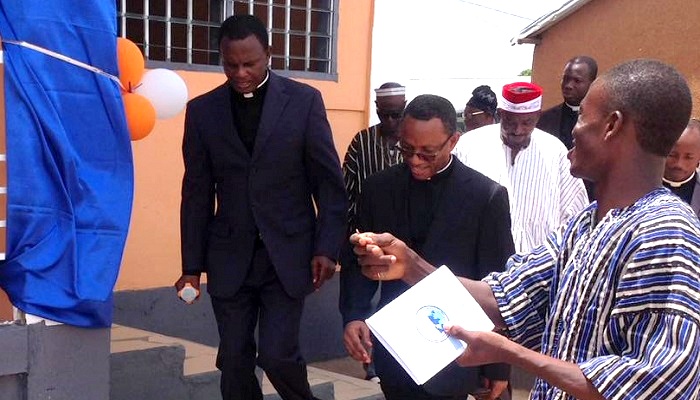 The General Secretary of The Church of Pentecost, Apostle Alexander Nana Yaw Kumi-Larbi, has paid a three-day working visit to the Bolgatanga Area.

The visit, which coincided with this year’s National Youth Week Celebration, took the General Secretary to the Navrongo Central church where he fellowshipped with the Navrongo and Sandema Zones.

Addressing the congregation, Apostle Kumi-Larbi was full of praise for the Youth Ministry for the amazing work done over the years. He said that the leadership of the Church remains committed to equipping the youth who are the future of the Church.

“Since the future of every institution depends on the young generation catching the vision of the leaders or adults, there is a deliberate attempt to mentor children and the youth to know Christ in a personal way, grow in Him and also understand the Church’s beliefs and practices,”

“Over the past ten years, there has been an increased intentionality by leadership of the church to focus on empowering children and youth by involving them in decision making, giving them the opportunity to lead programmes and utilize their talents and skills in church, as well as giving them leadership opportunities, among others,” he said.

Apostle Kumi-Larbi also revealed that, during the last 5 years (2013-2017), the overall church membership grew by 44%, which could be attributed to the significant increase of the Church’s children (below 13 years) and youth (13-35 years) membership by 43% and 57% respectively.

Speaking on the theme: “Remaining in the Anointing, the Sure Way of Knowing the Truth” with 1 John 2:18-19 and Galatians 1:6-9 as Bible texts, the General Secretary explained that John wrote the above-stated epistle at a time when the church was confronted with great heresies of opponents who denied that Jesus indeed came in the flesh. He noted that, just like in those days, many heresies exist in the world today concerning Christ and the Church. According to him, the greatest heresy of the contemporary world is that Jesus Christ is not the exclusive way of salvation.

“As Christians, we have the answer to the problem of heresy in the contemporary generation. The answer is the anointing we have received from the Holy Spirit. This is the surest way of dealing with all the heresies in the world,” he said.

The General Secretary also spoke of the importance of the Holy Scriptures in the present age, where people demand to know facts before they believe; where people demand to do whatever they please and, as a result, are not interested in the gospel truth but what would validate their carnal motives and actions.

“All these are evidence of the pursuit of higher truth and the prevalence of false doctrines in the contemporary world,” he said.

In his closing remarks, Apostle Kumi-Larbi underscored the need for Christians to remain in the basic doctrine of Jesus Christ and to totally depend on the Holy Spirit to teach and guide them in all truths.

The General Secretary, who was accompanied by the Bolgatanga Area Head, Apostle Wilberforce Nkrumah- Agyeman, rounded off his visit by dedicating the Kanjarga Central, Gbedema, Nakong and Gia church buildings.

The Chuchuliga and Chiana Water Projects were commissioned to the glory of God whiles the foundation stone for Katiu church building was also laid.