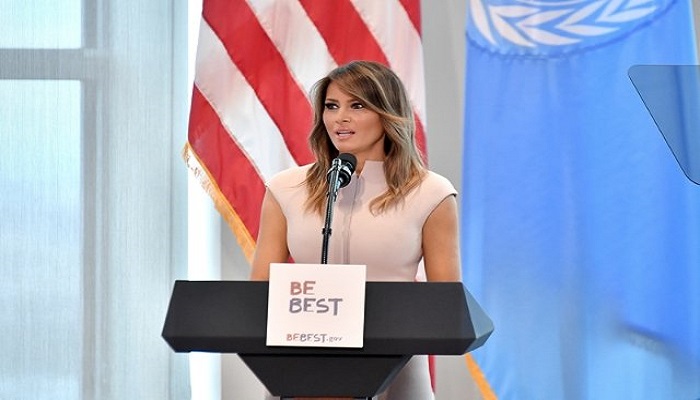 US First Lady Melania Trump is expected to partner Ghana’s First Lady, Rebecca Akufo-Addo, on child healthcare as part of her two-day working visit to Ghana.

Ghana would be the first African country Donald Trump’s wife would visit before continuing to Malawi, Kenya and Egypt.

She is expected to touch down at the Kotoka International Airport today, where she will be met by Ghana’s First Lady and other dignitaries.

Her trip comes five months after she launched her ‘Be Best’ campaign which demands she travels to meet with children all over the world in a bid to promote successful organisations and programmes that share her goal and work closely with the U.S. Agency for International Development (USAID).

Mrs Trump announced her visit at a reception for spouses of world leaders, held on the sidelines of the United Nations General Assembly, in New York.

While in Ghana, Mrs Trump will visit the Accra Regional Hospital, according to Information Minister-designate, Kojo Oppong Nkrumah.

The visit is being organised in partnership with USAID and will involve Ghana and the other three countries, described by Mrs Trump as ‘four beautiful and very different countries in Africa’, who have worked closely with the USAID in various areas.

Days before the 2016 Presidential elections, in which her husband contested and won, Mrs Trump told supporters in Pennsylvania: “Our culture has gotten too mean and too rough, especially to children and teenagers. It is never ok when a 12-year-old girl or boy is mocked, bullied, or attacked. It is terrible when that happens on the playground. And it is absolutely unacceptable when it is done by someone with no name hiding on the internet.”

Her work also focuses on gender equality, with an emphasis on education as tool to combat inequality.

On March 20, Mrs Trump met with top executives of technology companies including Amazon, Google, Twitter, Snap and Facebook, to discuss the issue and how it affects children.

Mrs Trump, born Melanija Knavs in Novo Mesto, Slovenia, on April 26, 1970, is the wife of Donald Trump, who was sworn in as the 45th President of the United States of America in January 2017.

Melania moved to the US in 1996 to pursue her modelling career and became a US citizen in 2006 after she married Donald Trump in 2005. She is the first naturalized and second foreign-born US citizen to become the First Lady, after Louisa Adams, wife of the sixth president, John Quincy Adams.

Mrs Trump came from a humble background, born to an Austrian father, Viktor Knavs, who worked as a car dealer, and a Slovenian mother, Amalija, who worked as a patternmaker at children’s clothing manufacturer, Jutranjka, in Sevnica.