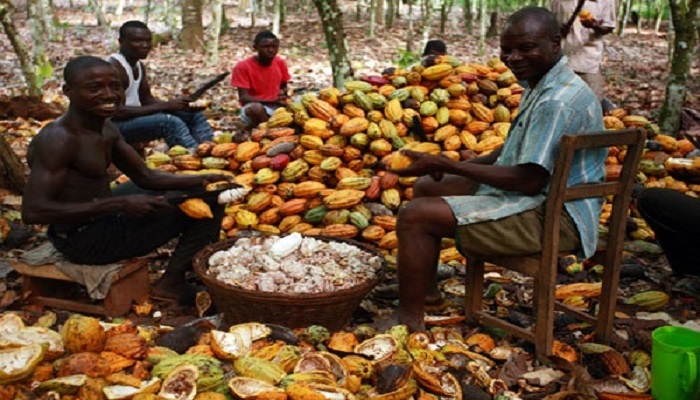 The government has maintained the producer price of cocoa for the 2018/2019 cocoa season at GH¢7,600 per tonne, translating into GH¢475 per bag of 64 kilogramme (kg) gross weight.

The price takes effect from today [Tuesday, October 2, 2018], with the new season expected to commence on Friday.

This was announced by the Minister of Food and Agriculture, Dr Owusu Afriyie Akoto, at the 2018 Cocoa Day Grand Durbar in Accra.

He said the decline in the price of the commodity on the international market, which had forced all the other 21 producing countries to slash their producer prices, made it impossible for the government to review the producer price upwards.

Cocoa price on the international market in recent times has reduced from US$3,300 per tonne to US$2,100, representing a decline of about 40 per cent.

Dr Akoto said the government, however, decided to maintain the producer price and not reduce it in order to minimise the adverse impact on farmers.

He urged the Ghana Cocoa Board (COCOBOD) to ensure that farmers were paid promptly for their cocoa beans.

For the first time, Ghana and Cote d’Ivoire jointly announced the producer price of cocoa.

The minister pointed out that Cote d’Ivoire reduced its price twice last year but because it was announcing this year’s price jointly with Ghana, it also decided to maintain it.

Addressing the numerous farmers present at the durbar, the minister said the government was collaborating with COCOBOD to rewrite the story in the cocoa industry.

“The story has to be changed and it will change,” he stated.

He said they were working to improve on the production, consumption and local processing of cocoa.

The Chief Executive Officer of COCOBOD, Mr Joseph Baoahen Aidoo, also addressing the farmers at the durbar, said the board’s productivity enhanced programmes (PEP) which were announced last year to boost the sector had made tremendous progress.

“The combined effects of the mass pruning, hand pollination, fertiliser spraying, mass spraying and other interventions we initiated have been amazing,” he said.

“For instance, traditionally, COCOBOD begins its spraying of insect pests of cocoa in August each year. But following a recommendation from the Cocoa Research Institute of Ghana (CRIG) regarding the bimodal population increase of the pests, the spraying schedule has been changed (now March to April) to allow for early spraying of farms to effectively control the mirids/capsids, Anomis caterpillar infections and P-devastans,” he added.

He said the second spraying was scheduled for September-October.

The CEO also pointed out that during the year under review, he and other management members took some time off their busy schedules to visit cocoa farms in most of the cocoa regions to familiarise themselves with and obtain first-hand information on how farmers were adopting and implementing the PEPs.

“We were amazed at the impact of the initiatives we have rolled out,” he noted.

“At a pollinated cocoa farm at Chirano in the Bibiani Cocoa District in the Western North Region, owned by one Gilbert Gyamprah, a 39-year-old farmer, we were greeted with an extraordinarily pollinated cocoa tree which had about 897 young pods, while other trees had between 200 and 350 pods,” he added.

He said if cocoa farmers across the country would collaborate with agricultural extension officers, adhere to good agronomic practices and adopt the PEPs, including hand pollination, yield per acre would increase significantly from the current average 450kg per acre to over 1,000kg per acre.

The Chairman of the Cocoa, Coffee and Sheanut (COCOSHE) Association, Alhaji Alhassan Bukari, said cocoa farmers remained the producers of the country’s wealth and, therefore, called on the government to support them.

He called on the government to intensify its educational programmes on the swollen shoot disease that was affecting farmers and also help eliminate poor pest control.

Alhaji Bukari assured the government of the support of farmers to implement all the measures that would improve output in the sector.

The chairman also urged the youth to respond to the government’s calls and enter into cocoa farming to replace the ageing farmers.