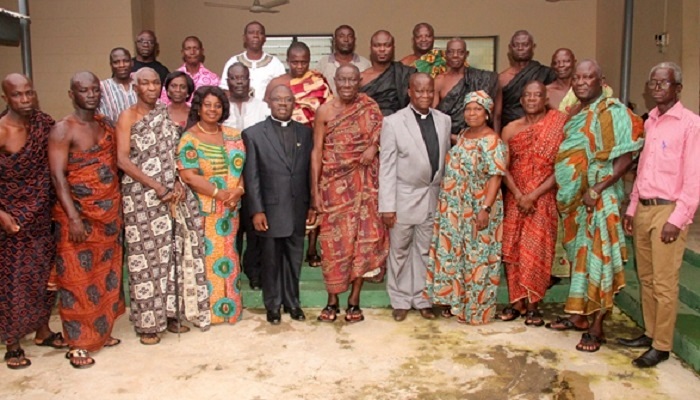 The Koforidua Effiduase Area of The Church of Pentecost has officially inaugurated the Palace Worship initiative aimed at taking the gospel message to traditional rulers.

The event took place on Saturday, September 22, 2018, at the palace of the Chief of Effiduase and the Nifahene of the New Juabeng Traditional Area, Nana Okoawia Dwumoh Baebu II.

Speaking on the topic: “Supporting Our Chiefs” at the event, the Koforidua Effiduase Area Head, Apostle Daniel Nsaful admonished Christians to honour and respect chiefs because of the significant role they play in society and the nation as a whole.

Apostle Nsaful observed that people in authority are usually perceived to be well to do in society and therefore have no needs, but that is not always true.

Quoting Exodus 17:10-13, the Effiduase Area Head said that there is no man on earth who does not need the help of others. He explained that without the help of Aaron and Hur, Moses would not have succeeded in the battle with the Amalekites.

According to him, just as Moses needed the help of Aaron and Hur for his hands to remain up in order for Israel to win the war; the Church and Chiefs need each other to succeed.

Apostle Nsaful further noted that worship in the palace is not a new thing and that it existed in Biblical times, citing David who first consulted the prophet Nathan on the issue of building a temple for the Lord.

“When David sinned against God, it was Nathan whom God sent to go the palace to point out his sins to him. Also when Hezekiah was confronted with a war situation and was in distress, the first person he called for was the prophet, Isaiah. All these go to confirm the fact that there exists a relationship between the church and the palace,” he said.

He further noted that when the early missionaries visited the then Gold Coast, they were able to propagate the gospel because of the contact they had with the chiefs. “It was the chiefs who assembled the townsfolk for the missionaries to share the gospel with them,” he said.

Explaining the role of chiefs in the society, Apostle Nsaful said chiefs occupy strategic positions in the society: “they are front-liners; they are fathers; symbol of authority, and they help in preserving our traditional values.”

The Area Head bemoaned the situation where people of the contemporary world look down upon their chiefs, who were once revered, and called on the Church to spearhead the crusade for a paradigm shift.

“The church cannot exist in any town without the concern of our chiefs. The mission of the church must be a holistic ministry, where our worship is not limited to our church halls,” he said.

Touching on the role of subjects, he admonished Christians to get involved in communal labour and called on church leaders to lead the way in this regard. He also said that the chiefs need the company, support, encouragement, advice and prayers of Christians. “Telling a chief I am praying for you is enough motivation” he opined.

Concluding his message, Apostle Nsaful said it was his prayer that the inauguration of Palace Worship would be the beginning of a renewed partnership between the Church and the Chieftaincy institution.

After the exhortation, the Nsukwao District Minister, Pastor Daniel Yaw Dzah, led the congregation in a time of prayer.

On his part, Nana Okoawia Dwumoh Baebu II, on behalf of the Traditional Council, thanked the leadership of the Area for their initiative and expressed his wish that the Palace Worship initiative would be sustained. He also praised the Church for developmental projects embarked on in the area and thanked them for supporting the construction of a new palace.

Present at the event were Elder Paul Omane (Area Executive Member and Palace Worship Coordinator) as well as the sub-chiefs of the Traditional Council.