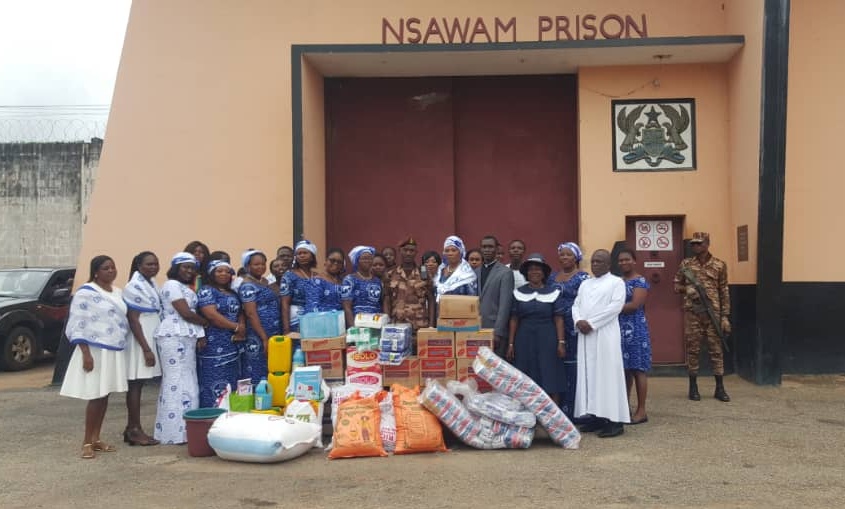 The Visionary Ladies, a wing of the Women’s Ministry in the English Assembly of Achimota District of The Church of Pentecost, on Sunday, October 7, 2018, paid a visit to the inmates of the Nsawam Medium Security Prisons.

The group fellowshipped with the inmates and presented items to support their wellbeing. The items included bags of rice, toiletries, cooking oil, soaps, sanitary pads, plastic buckets, among others, all valued at GH¢3,600.

Presenting the items on behalf of the Women’s Ministry, Hon. Deaconess Elizabeth Kwatsoe Tawiah Sackey (Deputy Greater Accra Regional Minister), said the items were to support the inmates of the prison and also to share the love of Christ with them.

Hon. Elizabeth Sackey was grateful to the officials for the opportunity to fellowship with the inmates. She advised the inmates who believe they were innocent of the charges against them to forgive their accusers since God could use their presence in the prison for the betterment of their lives.

Receiving the items on behalf of the inmates, the Officer in Charge, Rt. Reverend Martin Pabi, was grateful to the Church for the gesture. He said the items will go a long way to support the inmates.

In a sermon on the topic, “The Lord will Change Your Story,” based on Genesis 32:28-32, the District Minster for Achimota, Pastor Jonathan Kofie, urged the inmates to have hope in the Lord who is capable of changing their stories just as He did for Jacob in the Old Testament.

He said Jacob, who used dubious means to rob his brother of his inheritance and fled with his uncle’s daughters, received favour from the Lord.

“When Jacob came to himself, he had an encounter with the angel of the Lord and his life was never the same. His name was changed from Jacob to Israel which means the commander of the Lord’s army,” he said.

“God is capable of doing everything; He is a God who gives second chances,” Pastor Kofie said, adding, “An encounter, which is supernatural, can transform any person’s story.”

He admonished all inmates to fully trust in God for a total transformation and supernatural encounter.

Some of the inmates gave their lives to Christ.

The Achimota District Women’s Ministry Leader, Deaconess Agnes Ntow, said they were touched by the plight of the inmates and decided to support them.