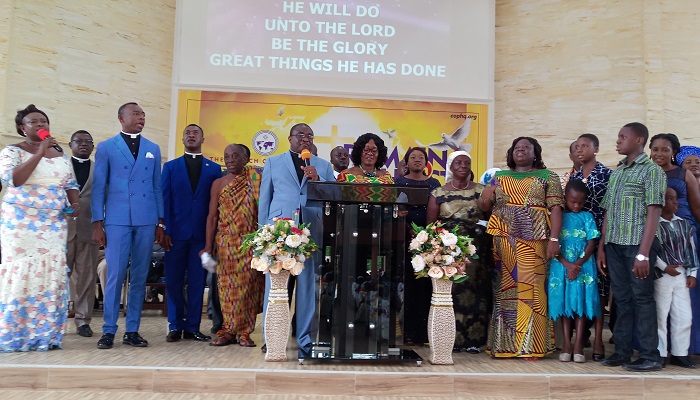 A special welcome service was held on September 23, 2018, by the Koforidua Area of The Church of Pentecost to welcome the new Area Head, Apostle Samuel Osei Asante and his family.

Apostle Asante takes over the administrative duties of the Area from Apostle Eric Nyamekye, who has been elected as Chairman of the Church.

In a sermon titled “The Church of Christ” taken from Mathew 16:18 and Jeremiah 3:15, the Suhum Area Head, Apostle A. E. K. Ekuban emphasized that the Church is the Lord’s and He continues to build it to His own glory. He said that although the gates of Hades shall wrestle against the church, it would never prevail because of the assurance of God’s word.

Quoting John 6:44 and Acts 2:47, the Suhum Area Head said whoever joins the Church is called by God because no one can come to God unless God Himself draws them to Himself. He also said that it is God who leads people to join the church daily and therefore Christians should regard new converts as people called by God and not humans.

He said that as God draws people to Himself as a Church, He also raises leaders among them to direct His people. He, therefore, encouraged members to be thankful that the Lord keeps giving the Church leaders.

Apostle Ekuban added that ministers who are assigned to the church carry the knowledge and understanding of the Word of God to nurture and edify believers. He said that it is the word of God that is able to liberate humanity from the kingdom of darkness into the kingdom of God.

The Suhum Area Head also stated that every minister is an ambassador of God because he takes from God and gives to His people (Exodus 32:9-10). He, therefore, admonished ministers to have time for the ministry and the Church so that they can receive from the Lord and feed the members with His unadulterated Word.

Apostle Ekuban also encouraged members to receive ministers with a good heart (Philippians 2:29a) and accord them the due respect (1Thessalonians 5:12-13). He urged them to do everything in their ability to assist ministers so that they would work with joy and in peace. (1 Corinthians 16:10).

“Intercede in prayer on behalf of the ministers, visit them at the Mission House and offer the little assistance that can be given to his family to make their stay a wonderful one,” he added.

In his response, Apostle S.O. Asante (also an Executive Council Member of the Church) expressed gratitude to all who attended the welcome service and also thanked the Koforidua Area for the warm reception. He also acknowledged the immediate-past Area Head, Apostle Eric Nyamekye, and other past leaders of the Area for leading the Area to its glorious state.