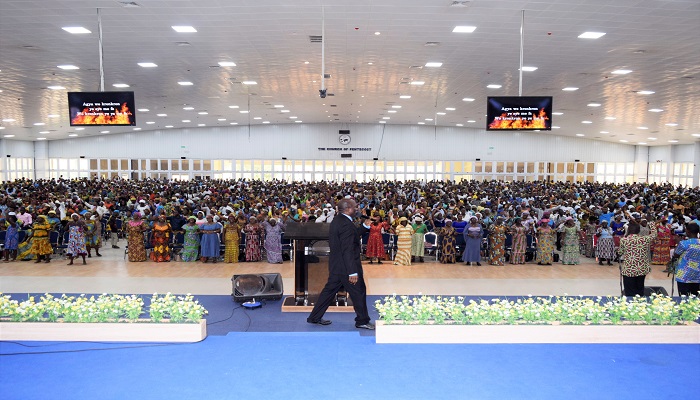 The Egyir Paintsil Auditorium at the Pentecost Convention Centre (PCC) on Friday, December 7, 2018, was filled to capacity by thousands of members from the Kaneshie Area of The Church of Pentecost during the December edition of the Area’s Biannual Retreat dubbed “Divine Encounter Reloaded.”

The retreat which was held under the leadership of the Area Head, Apostle Mike Kwame Etrue, was under the theme, “I Have Set The Lord Before Me, I Will Not Be Shaken!” taken from Psalm 16:8.

Apostle Mike Etrue in his welcome address noted that it is imperative for believers to continually seek the face of God, stating that, “a divine encounter will leave you with a fresh and deeper revelation of God.

“The encounter is all you need to have every negative circumstance turned around. It can be a tumour in your body, a huddle at work, crisis in the home and brokenness of the heart – the encounter with the Spirit of God will rub it down.”

Apostle Emmanuel Acquah who was the main speaker spoke on the theme, “I have set the Lord before me, I will not be shaken.” He opined that the Psalmist prayed this prayer because of his knowledge of things that have the potential to shake believers.

According to him, the storms that can shake the faith of the believer include trials from God, false accusation, persecution, fear, and temptations from Satan and his cohorts.

Apostle Acquah revealed that the abovementioned things are bound to come but the believer can withstand them when there are good “shock absorbers.”

He encouraged participants to always remember that God remains their solid defence in times of difficulty after reading Psalm 62:6. Furthermore, he admonished members to live and walk as children of God, approach the throne of grace in boldness and have the right understanding or theology.

Participants were also taken through a moment of deep spiritual renewal prayers by Apostle Nana Yaw Agyei. He charged members to avail and yield themselves to the Holy Spirit to be vessels of honour. With the assistance of the ministers present, spiritual gifts and unction were imparted unto members.

To the glory of God, two prophetic songs were received during the retreat. One of the songs was received by Mama Eunice Johnson who was also present.