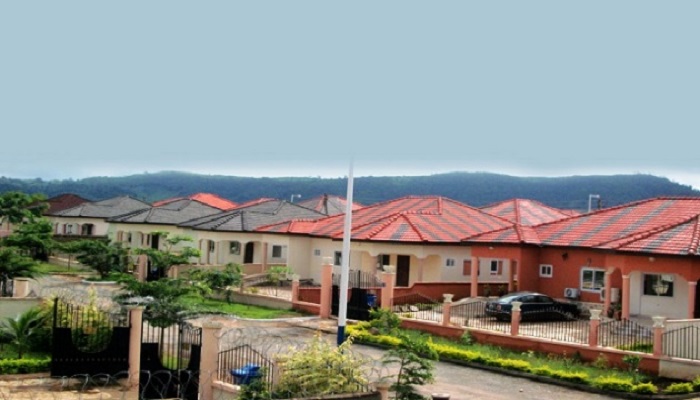 The Ghana Journalists’ Association (GJA) on Tuesday broke the grounds for work to begin on the Media Village Project (MVP) slated to help members own houses by retirement.

The initiative would also help resolve the housing deficit in the country, according to Dr Doris Yaa Dartey, Head of the Project Committee in breaking the grounds stated.

She was however disheartened that most hardworking and powerful journalists retired and were homeless…“Why should they serve their country through rain and shine and sometimes beaten and end up looking pathetic.”

She stated that it was unacceptable for journalists to go through all years and end up in a bad situation to behold, and encouraged members of the Association to take advantage of the opportunity to acquire their homes.

“Roof gives one dignity, peace of mind and relaxation, especially when one retired,” she added.

Dr Dartey explained that house ownership was the most cumbersome in Ghana by so doing, GJA in collaboration with KOANS Estate would ensure that member journalists were best guides and led to own houses with no controversy.

The Project, she stressed was for the welfare of members, facilitate mortgage loan and to de-emphasise business angle whereby one person would buy more than one house and sell to make profit but ensure one journalist had one house.

Mr Roland Affail Monney, GJA President said, it was in fulfilment of his promise made in his manifesto and said, the ground breaking was an indication that homelessness in the lives of retired journalists would be a thing of the past.

He encouraged members to commit to preparing for their future by acquiring the property though they did not enjoy the best of working conditions and appealed to banking institutions to aid GJA members to own houses by providing them with loans.

The GJA President commended the committee and the executive body for making the dream a reality and said the GJA executive would see to it that the final product met the members’ taste and standards.

Mrs Gloria Nketia, the Administrative Secretary of KOANS Estate who spoke for Mr Kofi Anokye, Chief Executive Officer, said, KOANS was located in Pokuase, Kuntunse and Pampaso, near Nsawam in the Eastern Region and had undertaken constructions for individuals and organisations.

She explained that since 1999, it had provided affordable houses for low income earners, one of which was the Ghana Revenue Authority Corporate Credit Union and currently, the GJA.

The Project was as a result of Memorandum of Understanding between KOANS Estate and GJA on 100-unit houses to be completed within a year from first payment.

She called on corporate bodies in a group of at least, 25 members to take advantage and own a village at KOANS Estate.