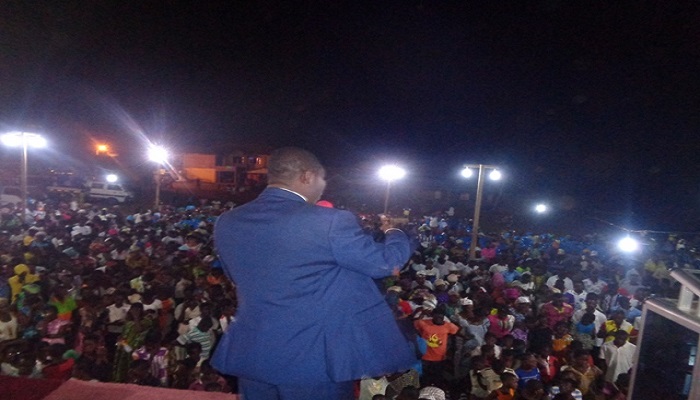 As part of the efforts to reach out to lost souls with the Gospel Jesus Christ, the Afram Plains Area of The Church of Pentecost has embarked on a 4-day evangelistic outreach at the Dwarf Island.

The event, which took place from December 12 to 15, 2018, was aimed at breaking new grounds for the Lord.

The Dwarf Island is within the Kwahu Afram Plains North in the Eastern Region and is surrounded by the Volta Lake with over 266 communities.

The outreach team included the Area Head, Apostle William Boakye Agyarko and his wife Juliet, the District Minister for the Dwarf Island, Overseer Raymond Agawu, and 13 other ministers from the various districts in the Area, as well as some officers and members.

The outreach focussed on the Battorkope and Avutey communities. The team was divided into two and was directed to employ the various evangelistic strategies such as house-to-house and open rallies.

There was a demonstration of the power of the Holy Spirit during the event as the residents received instant healing, with a woman testifying of being healed of a three-year-old haemorrhage condition.

As part of the outreach programme, dedication services were held on Friday, December 14, at Ada-Ntetiah and Kedekope assemblies. Speaking at the service on the theme, “Who is a Liar?” the Forifori District Minister, Pastor Francis Teye Kanor, stated that “professing to love God whilst hating one another makes one a liar.”

On his part, Apostle Agyarko advised the congregation to demonstrate genuine Christian attitude wherever they find themselves. He used the opportunity to commend Overseer Raymond Agawu and his presbytery for the good work done.

52 souls were won for the Lord during the outreach programme.