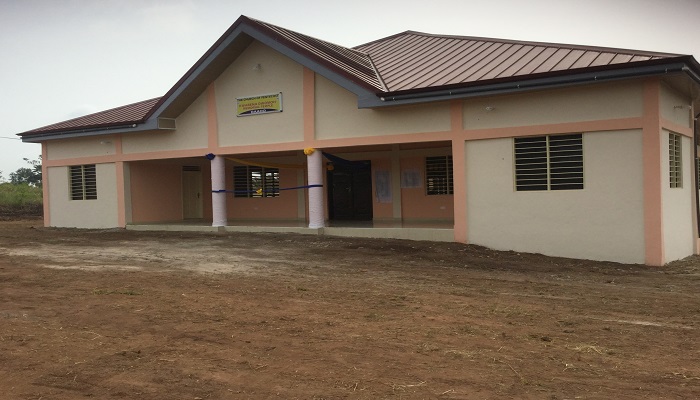 The Daaho Assembly church building in the Akyeremade District of the Mampong Area of The Church of Pentecost has been dedicated.

The building, which was named after the former Finance Board Chairman of The Church of Pentecost, the late Elder Kwabena Dwomoh Amaniampong, was fully funded by the Pentecost International Worship Centre (PIWC)-Graceland in the Teshie-Nungua Area.

The PIWC Graceland, spearheaded by the then Nshorna District Minister, Evangelist Francis Yaw Adu, and the Presiding Elder, Dr. Joseph Siaw Agyepong, decided to construct a church building at Daaho, near Ashanti Mampong, the hometown of Prophet James Osei Amaniampong (the then Teshie-Nungua Area Head). The project was in honour of the dedicated services Prophet Amaniampong rendered to the Teshie-Nungua Area.

The Amaniampong family donated four plots of land to commence the construction of the building in December 2016. The chief of the community also facilitated the extension of electricity to the project site.

Speaking at the dedication service, the Chief of Daaho, Nana Adjei Brempong who also doubles as the Dwirahene of Mampong Traditional Council, announced that he will worship with the local assembly. He also indicated that the street leading to the church will be named as ‘Chapel Square Street.’ He tasked the church to win the youth who were going wayward to the Lord.

In a sermon, Apostle John Osei Amaniampong admonished members of the church to serve God with their all. Reading from John 12:1-5, he stated that service is an integral part of the salvation and worship life of the believer. He encouraged the congregation to take good care of the building to keep it always in good shape.

He asked believers to give God things which are of great value such as their time, money and other resources. He admonished the members to take responsibility for the environment in which they find themselves.

On his part, Prophet Amaniampong appreciated the good work of PIWC Graceland, the chief of the community, and the various individuals for their roles in the successful completion of the project. He encouraged the members to own the building.

Present at the service were Pastor Ebenezer Agyapong (Resident Minister of PIWC Graceland), ministers and wives in the Mampong and Asokwa Areas, chiefs of the community, among others.