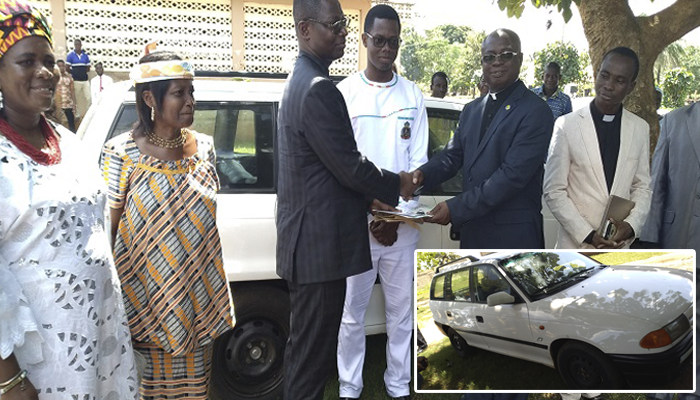 Elder Theodore Adu of the Pentecost International Worship Centre (PIWC) – Asokwa, and his wife have donated an Opel Astra vehicle with registration number GR 5793 V to the Offuman District of The Church of Pentecost in Techiman Area.

The presentation of the vehicle took place on Wednesday, October 31, 2018, at the premises of Offuman Central Assembly.

In a short address, Elder Theodore Adu said that the Opel Astra is his first car, but he decided to give it out to support the work of God. According to him, he initially planned to donate it to Pastor Ohene-Asa Otu, who is his longtime friend. However, he said, Pastor Ohene-Asa Otu advised him to rather donate it to the Offuman District which has no official vehicle.

Receiving the key to the vehicle on behalf of the Offuman District, the Techiman Area Head, Apostle Julius Franklin Asante-Ayeh, thanked and blessed the couple for the gesture. He seized the opportunity to also commend Pastor Ohene-Asa Otu for his selfless attitude by advising the couple to rather donate the vehicle to the district.

Present at the short ceremony were: Mrs. Beatrice Ohene-Asa Otu (wife of the Deputy Evangelism Director), Overseer Peter Amuzu-Avorde (Offuman District Minister) and his wife, Comfort, among others.