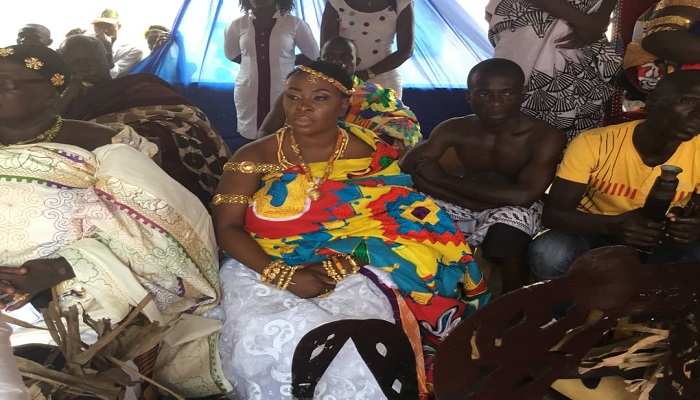 A UK-based member of The Church of Pentecost, Mrs Lydia Sarpong, has been enstooled as the Queenmother of Akim Nkwarteng, near Akim Oda in the Eastern Region.

The coronation of the new Queenmother with the stool name, Nana Arkoh Domah II, took place at the Nkwarteng Durbar Grounds on Monday, September 3, 2018.

The ceremony was officiated by the outgoing Akim Oda Area Head of The Church of Pentecost, Apostle Peter Kofi Dzemekey, assisted by Overseer Amos Ofori-Atta (Nkwarteng District Minister), and the pastorate in the Area.

Nana Arkoh Domah II, who fellowships with Woolwich PIWC in London, was presented with a Bible, after taken her oaths by the Christian Royals in the Akim Oda Area of The Church of Pentecost.

In a sermon titled, “My Presence Will Go With You” (Exodus 33:12-15, 1 Kings 18:30-33), Apostle Dzemekey admonished the gathering to seek God and His abundant presence in their lives.

He entreated chiefs and other royals to wholly depend on God’s presence for success in their areas of jurisdictions since God abhors syncretic attitudes, where they hold allegiance to other gods and beliefs.

Apostle Dzemekey explained how Elijah used natural stones to rebuild the altar of God without combining it with any incongruous elements (1 Kings 18:30-33), and called on all Christians to take a cue from it.

The Area Head prayed for the new Queenmother invoking the presence and power of God into her reign.

The colourful event was graced by several traditional authorities, among them were the Acting Akim Kotoku Gyasehene, Elder Nana Obrempong Akwasi Amoh Kyeretwie I, a member of the Eastern Regional and National Houses of Chiefs, who also doubles as the Chief of Abirem, and the Chief of Nkwarteng, Nana Amanie Ankrah II.