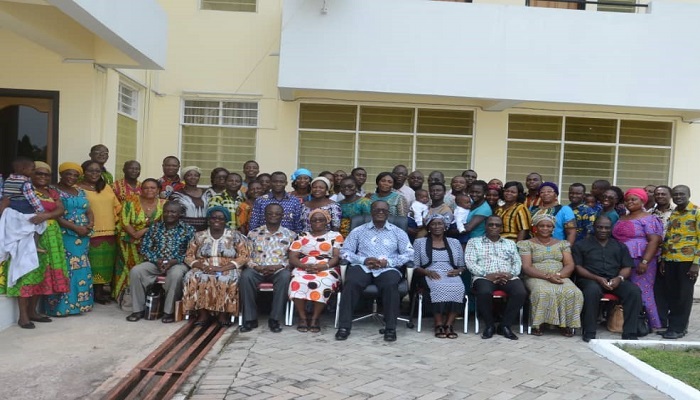 A 3-day residential retreat for ministers and their wives in the Cape Coast Area of The Church of Pentecost has taken place at the Pentecost Convention Centre (PCC) at Gomoa Fetteh.

The retreat, which brought together all 29 ministers in the Area, including the Area Head, Apostle Samuel Yaw Antwi, and his wife, was held from November 27 to 29, 2018, under the theme, “The Pentecostal Minister: God’s Agent for Transformation.”

In his inaugural address, Apostle S. Y. Antwi explained that the retreat was to allow the ministers and their wives to wait on the Lord for renewed strength, discuss the fallouts of the November Heads’ Meeting and strategize to achieve the goals of the Church’s vision for the next five years, “Possessing the Nations.

The Area Head laid stress on the need for ministers and the entire church membership to become agents for transformation in order to possess the nations and help build up the Church of Christ.

Speaking on the topic, “Excellency in Ministry” taken from 1 Corinthians 14:12, Apostle Antwi challenged ministers to endeavour to excel in their calling. He underscored that one of the main agenda of Vision 2023 is for ministers and the members to excel and portray Christ in all spheres of life.

“Members must see themselves as ministering to the Lord wherever they find themselves,” he emphasised. He called on ministers and church leaders to excel in their ministerial efforts.

The Area Head entreated leaders to develop their character, since it is one of the paramount requirements for achieving excellence.

Speaking on the topic, “The Heart of a Leader,” Apostle Nana Yaw Adjei called on leaders to take control of their hearts. Reading from Exodus 32:1-35 and Jude 1:9, he disclosed how the Israelites disrespected Moses and his failure to control his heart, and the consequent overreaction- resulting in the devil’s dispute over his [Moses’] dead body.

According to Apostle Nana Yaw Adjei, the Scripture compares leaders to bond servants and prisoners who have no choice but to serve. He cautioned Pentecostal ministers to act as servants called to serve without choice. He said that like Moses, leaders can be disdained by followers, but the leader must control his heart and restrain from reacting negatively.

He revealed that God builds His church with three things – leaders, the Holy Spirit and finance. He said leaders are the number one on the list because the Spirit does not operate in a vacuum, but operates through people. “At the inauguration of His Church on the day of Pentecost, there were leaders upon whom the Spirit descended,” he pointed out.

Apostle Badu Wood also indicated that finance is key, especially towards the building of God’s church.

He said that even though Peter and his cohorts were naturally born leaders (John 21:2), God make leaders out of others (Ephesians 4:11). “Leadership is an act that can be learnt but unfortunately not all ministers are leaders,” he stated, citing Aaron, the High Priest, who failed to lead and allowed himself to be controlled by the people (Exodus 32:1-35).