5 Girls Run Over By Articulated Truck Laid To Rest 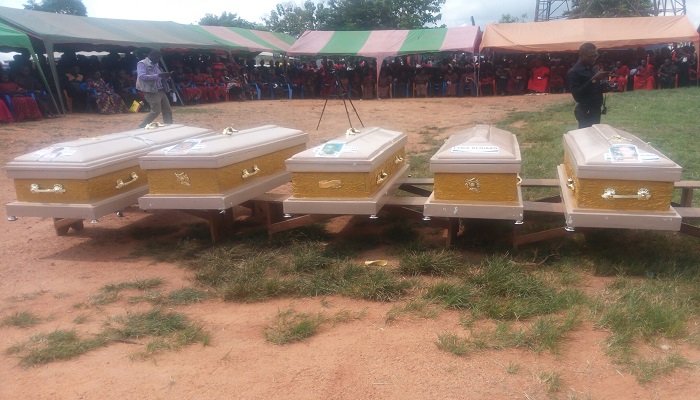 5 Girls Run Over By Articulated Truck Laid To Rest

The remains of the five school children of the Assin Atobiase and Kyekyewere Primary Schools in the Central Region who were killed by an articulated truck have been laid to rest.

The children, all girls, four of whom were members of The Church of Pentecost in the Assin Darmang District, reportedly died on the spot when the articulated truck with registration number AS 8123 16 run over them on Friday, November 16, 2018.

The gory incident happened at about 5:30pm when the girls, namely Emmanuella Nunoo, 13; Vivian Asare, 13; Abigail Appiah, 12; Lydia Beniako, 10, and Eva Okyere Buama, 12, had closed from and were heading towards home.

According to police report, the trailer of the truck got disengaged from the head after the driver of the truck fully loaded with bags of cement had tried to swerve a pothole. He lost control in the process and veered off its lane and eventually ran into the school children who were about crossing the road to the other side. The six victim, Harriet Danso Kwarteng, however survived.

Preaching the sermon at their memorial and burial service at Assin Damang, the Assin Foso Area Head of The Church of Pentecost, Apostle Sylvester Arhin, consoled the bereaved families and urged them to strengthen themselves in the Lord, because their redeemer who is the Lord still lives.

Apostle Arhin advised all road users to be careful when using the road, and urged drivers to drive carefully when approaching human settlements. He also called on government to take a second look at road designs and engineering during road construction.

Speaking on the topic, “It is an Accident” (Luke 13:1-5; Job 19:25), Apostle Sylvester Arhin said that humanity live in a world of accident as a result of the fallen human nature.

“When we hear of these happenings [accidents], we may think the victims died due to their own sins but the best lesson we can pick from these occurrences is to repent else we will also perish like them, because we are not more righteous than them,” he posited.

According to him, the root of all deaths, including those that happen through accidents is sin, but there is always hope for those that seek for the Lord whether dead or alive.

The District Chief Executive (DCE) for Assin South, Honourable Derrick Owusu Ambrose, on behalf of the Government and the people of the district expressed his condolences to the bereaved families.

Describing the death of the five girls as regrettable, the DCE expressed his resolve to make sure that the road is re-engineered to avert possible future reoccurrence since that stretch of the Cape Coast-Assin Foso road is becoming a death trap.

The Church of Pentecost Headquarters took care of the cost of the coffins, while the Assin Foso Area of the Church donated GH¢2,500.00 to the bereaved families and the surviving victim.

Present at the funeral service were heads of churches, traditional leaders, officials of the Regional and District Directorates of Education, security officers and staff and pupils of the affected schools.