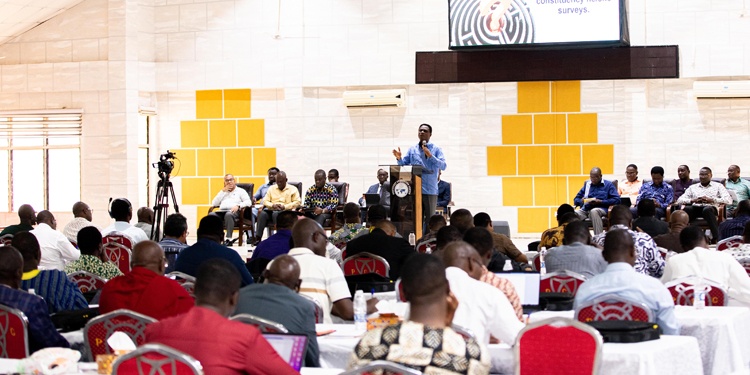 As part of the Vision 2023 strategic direction of The Church of Pentecost, the International Missions Directorate of the church has organised a seminar for all Missionaries, Missionary Attachees, National Heads, Regional Heads, and Area Heads in the external branches of the church.
The International Missions Director (IMD) of the church, Apostle Emmanuel Agyemang Bekoe, said that after every Heads’ Meeting, the International Missions Office organises a seminar to help the national leaders to understand the topics treated.
The seminar was held on Monday, November 21, 2022, at the Pentecost Convention Centre (PCC), Gomoa Fetteh, near Kasoa in the Central Region of Ghana.
Speaking on the topic, “Missional Approach to Language Specific Migrants,” the IMD said that people migrate for different reasons such as for greener pastures or just wanting to be adventurous, saying, “When people migrate, they do so with their culture, language, food, way of life and clothing.”
He disclosed that when people migrate with their culture, they normally look for people who speak their language to relate with. He, therefore, urged missionaries to be open-minded and have a language-specific approach to missions.
Apostle Agyemang Bekoe explained that in reaching out to migrants, migrant communities must be intentionally targeted with the gospel. He also called on leaders to be sensitive to the language of migrants who are found in the church, and train and equipped them to take up leadership roles in the church.
Apostle Dr. Daniel Okyere Walker, the Tarkwa Area Head, who doubles as the Co-ordinator for the Western Regional Co-ordinating Committee and Executive Council Member, called on the missionaries to strive to build a multicultural church in the various nations.
“A multicultural church is where people are respected irrespective of culture and race. It is not always the easiest church to pastor because it requires extra work from the minister,” he said.
Speaking on the topic, “Becoming a Multicultural Church,” Apostle Dr. Walker mentioned that a multicultural church is where people of different nationalities and cultures come to worship. According to him, worshippers are free to worship in their own languages and every person is treated and given the same opportunity.
He stressed that the church that becomes multicultural does not just happen due to some efforts needed in fulfilling it. These efforts, he stated, must be done in leadership, liturgy, preaching and teaching; praises and music; language and communication; and social activities.
Interacting with the national leaders, the Chairman of The Church of Pentecost, Apostle Eric Nyamekye, implored them to be innocently wise so far as the world is concerned since they are sent as sheep among wolves.
“The devil’s strongest power is his ability to deceive man because he is the combination of wisdom and lies. Therefore, when you are dealing with him, you need wisdom,” he stated.
Apostle Nyamekye noted that though issues and challenges may come, their ability to overcome them would determine the extent of their success, stating, “The need for wisdom becomes critical when you lead people.”
He added: “Wise people work in some particular ways to achieve an end. Learn and read books but don’t conclude on what you are being told because there is more God can teach you.”
Touching on the need for leaders to seek wisdom, Apostle Nyamekye said that wisdom is the principal thing of all human desires. He stressed that wisdom is the first of God’s creation and it needs to be investigated. He also said that wisdom is the foundation upon which things are established.
Other speakers were Apostle Dr. Christian Tsekpoe (Director, Post Graduate Studies and Research Directorate, Pentecost University), Apostle Lawrence Otu-Nyarko (Finance and Administrative Director, Headquarters), Pastor Elvis Nate Nague (Cyprus National Head), Pastor Paul Odai Laryea (IT Manager, Headquarters), and Pastor Morgan (Head of IT, COP-USA).
The International Missions Directorate also honoured eight former missionaries who had ended their missions duty. They were Apostle Isaac Anane-Sarfo (Argentina from 2015 to 2022); Apostle Yao Semanya Dogbe (D.R. Congo from 2015 to 2022); Apostle Michael Agyen Brefo (Gabon from 2018 to 2022); Pastor Ulrick Desire (Haiti from 2019 to 2022); Pastor Samuel Jojo Forson (Jamaica from 2018 to 2022); Apostle Daniel Mireku Gyamera (Madagascar from 2017 to 2022); Apostle Dr. Dieudonne Komla Nuekpe (South Korea from 2015 to 2022), and Pastor Francis Agyemang Badu (Rwanda from 2015 to 2022).
PENTECOST NEWS