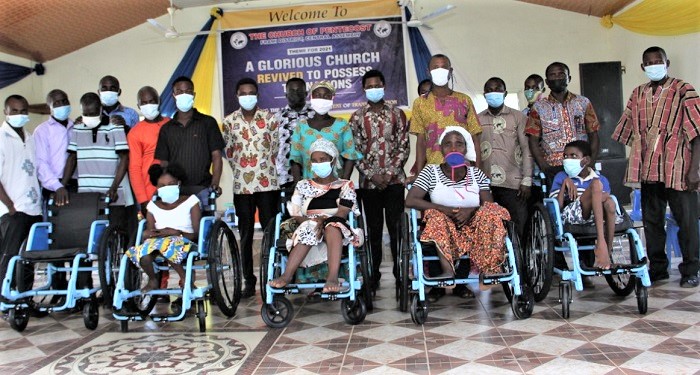 The Frami District in the Cape Coast Area of The Church of Pentecost has held a day’s seminar for the Frami community, and its environs aimed at promoting the social inclusion of persons with disabilities (PWDs).

The seminar, which took place on 14th August 2021 at the Frami Central Assembly auditorium, was attended by traditional leaders, members of the district as well as the community folks.

Speaking at the event, the National Coordinator for Ministry to Persons With Disabilities (MPWDs) of the Church, Overseer Alexander Nyame, called on the members to demonstrate love towards persons with disabilities in the church and the entire community.

Quoting from Genesis 1:26-27, he mentioned that such people are also created in the image of God and, therefore, must not be neglected. Instead, he urged them to demonstrate love to them and lead them to Christ.

He further outlined the church’s vision for the PWDs as captured in the five-year strategic vision of the church (Vision 2023) and challenged all to work towards the successful realisation of the vision.

Overseer Alexander Nyame, on behalf of the Church and the MPWDs, donated five wheelchairs and four clutches to church members in the Frami and Dominase District as well as some individuals from Abrafo and Bremang communities.

Overseer Appiah, on behalf of the Frami District, donated a gari-processing machine to the District MPWDs Committee to be used to generate money to support the livelihood of the PWDs in the district.

The Chief of Abrafo Odumase, Nana Amoateng III, expressed his profound gratitude to the Frami District Minister, Overseer Daniel Appiah, for organising such an insightful seminar for members, chiefs, and the community to educate them on the plights of PWDs and the need to care for them. He further thanked the church for its continuous support for PWDs.