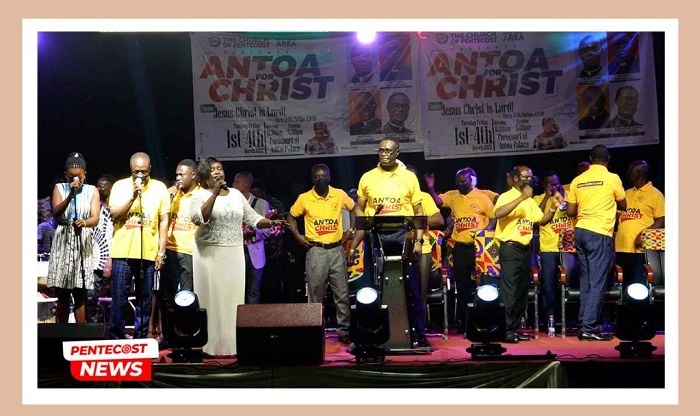 A total of a hundred and forty-five (145) souls were won at the just ended ‘Antoa for Christ Crusade’ organised by the New Tafo Area of The Church of Pentecost in the Ashanti Region. Sixty-six (66) of the new converts have since been baptised in water.

The 4-day event which began from Tuesday, March 1, 2022, to Friday, March 4, 2022, was held under the chairmanship of the Area Head, Apostle Samuel Antwi.

Numerous life-changing testimonies shared during the crusade awakened the love of God in the lives of the members.

Despite the heavy downpour experienced on the first day, hundreds of members trooped to the grounds and remained grounded while others sought asylum in buses and frontage of houses.

Speaking to the topic, “Jesus is Lord”, Apostle John Obeng Kesse, Suame Area Head, expounded on the effectiveness of the name of Jesus and the need for every Christian to rely solely on him in this era of total dejection.

“Anyone living in the oppression and shackles of sin must come directly to Jesus. He is the Saviour of the world and will deliver you as you come,” he assured.

Pastor Samuel Edzii Davidson, Offinso Area Head of the church, who delivered a sermon on the topic, “The Gracious Personification of Jesus Christ and How His Lordship Transforms,” said that God’s redemption programme was drawn in Christ to save sinners who pursued salvation and transforms them for glory when they draw near.

Climaxing the crusade, Apostle Kenneth Baffoe Antwi, Ejisu Area Head, also spoke on the personality of Jesus Christ and stated why humanity must strive for the life He gives.

Apostle Samuel Antwi, the Area Head, in an interview, said that the huge number of souls won was an indication of the signs of God’s total lordship over Antoa and its environs.

This, he said, is a clear testimony that the vision for the crusade of getting the gospel to the township, had been achieved.

“Some of the Pastors and devoted officers have been chosen to follow up on the new converts to help nurture them as they begin their walk with Jesus,” he stated.

He further assured that the New Tafo Area will be very active in the activities of the Evangelism Ministry, as an Army Equipped to Possess the Nation to redeem the lost, empower, and convert the weak to Christ.