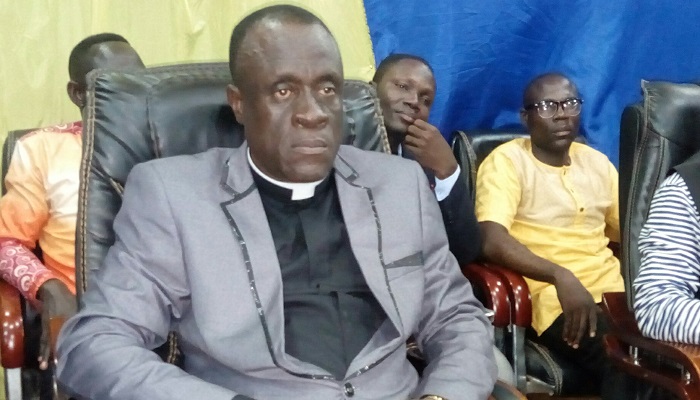 The Yennyawoso District in the New Tafo Area of The Church of Pentecost has officially welcomed Pastor Charles Oduro, as the new District Minister with a solemn service held on Sunday, August 19, 2018, at the Yennyawoso Central Assembly auditorium.

Pastor Oduro superseded Pastor Andrew Adu-Amankwaah, who recently retired from active ministerial service of the Church, having served 24 years in the ministry.

The event, which was officiated by Pastor Eric Yaw Osei, the Buokrom Estate District Minister, had in attendance Pastors Seth Dwamena Asante (New Tafo District Minister), Anthony Kwesi Mensah (Resident Minister, PIWC-New Tafo), all officers and members within the district, relatives and the loved ones of Oduro family, as well as the representatives from their previous station.

In a sermon, Pastor Yaw Osei read Matthew 13:1-9 and centred his message on the lessons of the parable of the sower. He identified the three elements in the parable as the seed, land and the farmer, which according to him, represent the word of God, the heart of man and the Church leaders respectively. “Every Church leader is a farmer,” he stated.

Expounding further, Pastor Yaw Osei noted that the seed, which is the word of God, is faultless but the problem lies with the kind of heart, with which one receives the Word. He, therefore, advised the gathering to always have a good heart for the word of God in order to be fruitful in all their endeavours, saying, “The land is the determinant of the success of the seed.”

“Though the land might be infertile and thorny, nonetheless, if the farmer is good enough, he can turn it into good use for fruitfulness,” he said. He, thus, called on church leaders, particularly pastors, to strive to prepare the members to be spiritually and physically fruitful. This, he said, could be done through prayers and feeding them with the unadulterated word of God.

Citing several professions and their mannerisms, Pastor Yaw Osei advised the congregants to avoid comparison of Church leaders because God has His own ways of dealing with each leader.

Referencing 2 Samuel 23:14-17, he admonished those gathered to always assist Church leaders and encourage them so that they could give off their best for the growth of the Church.

“The farmer who tills the land needs peace of mind and protection so that he can work harder. So let’s assist our Church leaders with prayers and encouragement and avoid slandering them,” he concluded.

In a response, Pastor Charles Oduro was full of gratitude to the Almighty God and extended his heartfelt appreciation to all who graced the occasion with their presence. He entreated the gathering not to give audience to the false prophets and their erroneous teachings and prophecies but they should rather focus on Jesus Christ alone and trust Him for eternal life.

Finally, Pastor Oduro called for the full support and cooperation of the members so that with togetherness they could build God’s Church.

Pastor Charles Oduro is married to Mrs. Gladys Oduro with four children. He was called into the full-time ministry of The Church of Pentecost in 2003 and has since pastored in the following districts: Kajaji, Adansi Asokwa, and Koforidua Old Estate.